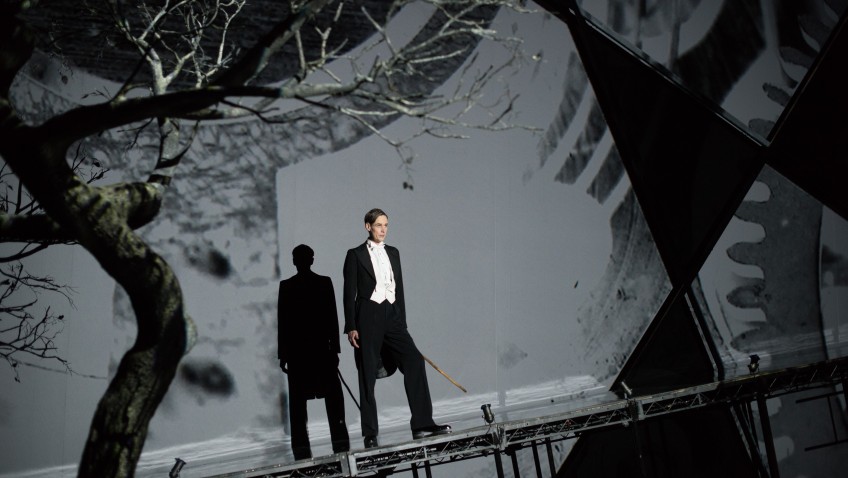 Schubert’s Winterreise, a cycle of songs by Wilhelm Müller for voice and piano, is no longer a leider recital.

Schubert’s psychological masterpiece has been given a new perspective by Hans Zender’s orchestral re-imaginings and is now Zender’s Winterreise.

Netia Jones who directs and designs the production, says “The Dark Mirror is not a concert or an opera but a piece of theatre where one of the protagonists is an orchestra.”

The tenor is Ian Bostridge. The orchestra is Britten Sinfonia. The conductor is Baldur Bronnimann. 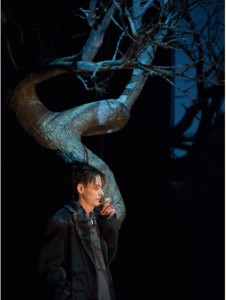 Müller’s 24 songs, full of angst and nostalgia, are a dramatic monologue of lost or unrequited love. A grief-stricken lover, no longer young, makes a heartbreaking journey through a winter landscape to his grave.

Schubert wrote the music for Winterreise when he was dying of syphilis in 1828. He was only 31. It’s sombre, gloomy, bleak, depressing piece. You have to be haunted by the cycle to be able to sing it.

Ian Bostridge, who is now 50 and first sang it when he was 20, has sung it over 100 times. Initially, he looks as if he might be cast as Emcee in Kander and Ebb’s Cabaret but any hopes of a post-Weimar cabaret staging are never realised

Bostridge’s performance is something very special and Zender’s “composed interpretation” is quite extraordinary and fascinating.

I cannot say the same for Netia Jones’s multi-media expressionistic production, which integrates film and video, shadow and light, and which has one or two striking images, but is no help at all when it comes to a greater understanding of Müller and Zender.