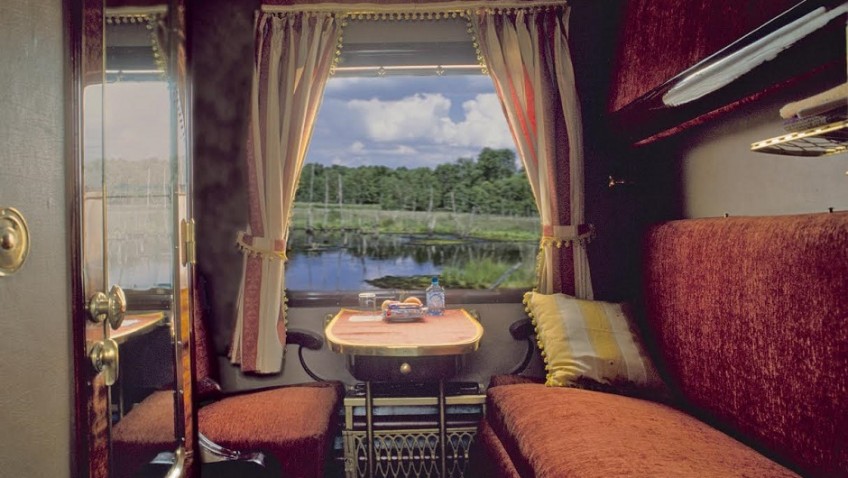 Flickering past the train window are birch trees and patches of spring snow. And this ever-changing yet never changing scenery has become the surprising highlight of my time on the Trans Siberian Express. It’s slow travel at its best, where the chief thrill is the journey itself: the cosy carriages, on board camaraderie, and the constant edging forward across the vastness of Russia.

The whole trip from Moscow to Beijing is a journey of 4,736 miles, which takes six days on an ‘ordinary’ through train, or 16 days on the Tsar’s Gold tourist train, which makes sightseeing stops along the way.

This German-run ‘cruising on wheels’ experience is for people who prefer everything pre-booked and arranged in advance and don’t fancy tackling the language barrier on regular Russian trains.

I boarded the Tsar’s Gold train in Yekaterinburg, just east of the Ural Mountains, for a three-night ride to Irkutsk, not really knowing what to expect.

We chugged out of the city and passing the tiny kitchen at the end of the carriage, I entered the toasty dining car and began meeting the jolly group of about 20 English speakers. Most passengers on the train are German, but the ‘English’ group on this trip were Brits, Danes, Dutch, Italians, Americans, and a Spaniard. We were together for meals and tours.

It was nice to warm through, eat a hearty meal of fish salad, cabbage soup, and ‘beef in Russian Monastic Manner’, and move on from the gloomy spots that I’d visited before boarding in Yekaterinburg. In 1918, Tsar Nicholas II and his family were shot, mutilated, and then dumped down a well there.

I learnt that it wasn’t just the Imperial family who’s enforced journey eastwards was doomed, when after dinner, Larissa, the guide for us English speakers gave her evening talk on Siberia.

“It’s been a place of exile for 300 years, with perhaps 21 million inmates passing through the gulags in total”, said sparky Larissa. The majority of people were sent east during Stalin’s time, when he expanded the isolated prison camps. “Even on the trains” said Larissa, “There were gun emplacements on the top of the carriages and hooks underneath to kill anyone trying to escape”.

I wouldn’t fancy anyone’s chances in this wilderness. Between the cities there was barely a sign of life; save for a meagre hut or two close by the train tracks every few hours. I’d imagined that the size of towns would grow smaller and cuter as the train trundled further into Siberia, but Novosibirsk, the first stop after Yekaterinburg and 2,000 miles east of Moscow, was big and bombastic. Soviet era buildings here included the country’s largest opera house and a prominent Lenin statue flanked by five heroic workers.

At Krasnoyarsk, while other passengers were having a city tour, I asked train manager Hans for a peek in all the carriages. Squeezing past a large man with a small vacuum cleaner, I entered the Classic category of cabin – a basic compartment with two bench seats that convert to four bunks, with shared toilets at either end of the carriage. It costs about £4,000 one-way per person.

“All of our classes include the same meals, and sightseeing”, said Hans, as we moved briskly down the corridor. The windows of the Nostalgia cabin, with one shower shared between two cabins, were being cleaned inside and out – “so our guests can always take good photographs”, he explained. At the front of the train were swish modern Bolshoi Class compartments with double beds and an en suit toilet and shower.

I caught up with the group walking towards the city with local guide Irena. Siberia may conjure an empty freezing wasteland to us, but almost 25 million people live here, in an area about the size of China.

Down by the river promenade, the spring sun was enlivening everyone’s spirits.   Sitting on the open deck of a large pleasure boat I fell into a backslapping beer-fuelled chat with some young Russian lads about football and pop music.

On my last night aboard the train I returned to my compartment tipsy from a robust vodka tasting evening with Larissa and the group. I fell asleep wondering if she had really said that Tsar Peter the Great had made dancing and moustaches compulsory?

We joked as the train approached Irkutsk – “yes Peter the Great really did that” beamed Larissa. Then after my 100-hour stint on the train, I popped back to the compartment for a last stare into the birch forests.

The monotony had become magical, the carriages homely, and several of the group were now friends. What a cracking experience, and what a wrench to leave for my six-hour flight back to Moscow.

The Russia Experience (trans-siberian.co.uk; 0845 521 2910) has a 16-day Tsar’s Gold train journey from Moscow to Beijing (or vice-versa) starting from £3580 per person in standard category based on two people travelling through to £11995 per person (based on two) in Bolshoi Class, with all meals, sightseeing and transfers but excluding flights. If budget is no problem then the top-of-the-range Golden Eagle starts from £9695.