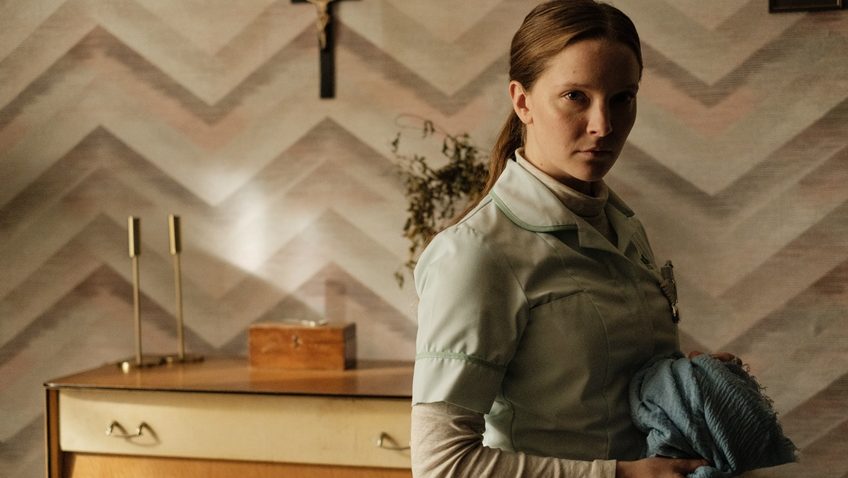 The producers and director of Saint Maud patiently held out for a cinema release for this accomplished British feature film debut, and we owe it to them to see it on the big screen, in a socially-distanced cinema, as intended. Somewhere between a psychological thriller and a horror film, Rose Glass’s Saint Maud is not only astonishing for being a debut feature, but for being British. The Brits do apocalyptic and zombie films, but for the Psycho’s, Carrie’s, Get Out’s and The Mother’s, we tend to think of America. And so, apparently did Glass. She told one interviewer, ‘imagine Maud as Travis Bickle, (Martin Scorsese’s Taxi Driver) if Travis Bickle was a young Catholic living in an English seaside town…’ Despite the inspiration, this is a creepy and nail-bitingly gripping original.

The job is to look after Amanda (Jennifer Ehle), a chic, extroverted, worldly, bi-sexual former dancer and choreographer who has terminal cancer. Right away, we are hit by the contrasting personalities, backgrounds and physical characteristics of the two women. Glass’s job is to unleash the tension in this relationship when missionary work is thrown into the cauldron.

The only unconvincing part of the film is how this once celebrated choreographer and dancer ended up in an isolated, oversized villa in a seedy seaside town. Approaching the large, haunted-looking house on a hill overlooking the misty town, Maud is nervous. She calls on God, as she often does, for assistance: “Dear God, please watch over me in my new posting.”

It is Amanda who should be praying – if she were the praying type, for Maud soon sizes up her patient’s profligate lifestyle and makes it her mission to save Amanda’s soul. If you are thinking of Rob Reiner’s Misery, in which an obsessive fan imprisons a bedbound writer to make him write a story, the match is more equal here.

When Maud asks the departing carer, ‘how is she?’, the woman answers, ‘bit of a c**t, actually.’ Amanda is a strong, sometimes acerbic woman, but her transformation from a vibrant woman being watched and feted, to a pale, bedbound invalid being pitied or forgotten makes her vulnerable. As Amanda sees through the holier than thou veneer to a repressed, lonely, and confused young girl, she light-heartedly sets out to save the recently converted nurse from herself.

Amanda’s attempts backfire as often as do Maud’s. On one occasion Amanda insensitively tells Maud, ‘you must be the loneliest girl I’ve ever seen’, but Maud would disagree. She not only talks to God, but he sometimes replies. Her faith is worth all the boozy, boho friends Amanda could ever squeeze inside her den of iniquity.

Glass is already a master of trickling out the tension across the length of the film. When Amanda’s lover, Carol (Lily Frazer) turns up, gatekeeper Maud denies her access citing the late hour. The real reason is because Carol is a bad influence. Like an abusive husband, she must separate Amanda from her friends and their evil ways to purify her for the kingdom of heaven. Pushing her way past Maud, Carol goes up-stairs, leaving Maud to listen to the giggles through the door, knowing she is the object of their ridicule. Maud feels it is her duty to help her lost patient, and cannot fail, or she would be failing God. When Maud becomes autocratic and demanding, Amanda puts her in her place and things end badly.

This weakness calls for repentance in the form of self-flagellation, and here the film transforms into a psychedelic hell. Maud tarts herself up and goes into a bar where she pours down the drinks, making eye contact with a customer whom she follows into the loos for a humiliating quickie. This fall from grace leads to repentance of a particularly cringeworthy nature when Maud fills her shoes with nails and takes a stroll into the main square. It is right up there with the “sliced eye” scene in Un Chien Andalu, the surgery scene in Franju’s Eyes without a Face, the shower scene in Psycho, or the dental chair scene in Marathon Man.

The tension rises to an unbearable level when Joy (Lily Knight) a former colleague from the hospital, stops by to check up on Maud and apologise for being unable to join her for a drink the previous night. This call was, perhaps, a cry for help, and a missed opportunity for Maud to reconnect with the real world. For the remainder of the film we are inside Maud’s head, losing contact with reality.

During Joy’s nail-biting visit, we learn a little more about the hospital incident behind Maud’s name change and religious conversion. Joy has to hide her shock to see the half-naked, scrawny woman in her depressing bedsit where Maud has been praying for strength to carry out her greatest test of faith yet. You spend the whole visit anticipating something dreadful, and are relieved when Maud, almost pushes her well-meaning colleague out the door.

You might find yourself imagining that Maud’s mother is the fanatical Mrs White, and that her sister is Carrie, a girl who wants nothing more than to fit in but has another calling. Fortunately, Glass does not overload us with an origins story or biographical flashbacks. Maud is more akin to the sexually frustrated, fanatical German housewife in Ulrich Seidl’s Paradise: Faith, who finds satisfaction by visiting unwed couples, or troubled woman and bringing them to Jesus. What begins as a psychological horror film turns into a chilling meditation on the fine line between mental well-being and religious fervour, which offers a false sense of comfort and absolution at the cost of oppression, extremism and zealotry.

Cinematographer Ben Fordesman bathes the seaside resort not in sunshine, but in mist and shadowy dusk with a sickening crimson tone saturating the screen. Paulina Rseszowksa’s superb production design sustains the seedy atmosphere that is as strong as the faultless acting from Ehle, playing against type, and Clark (Love and Friendship, Crawl) who will surely be noticed when the awards are handed out.