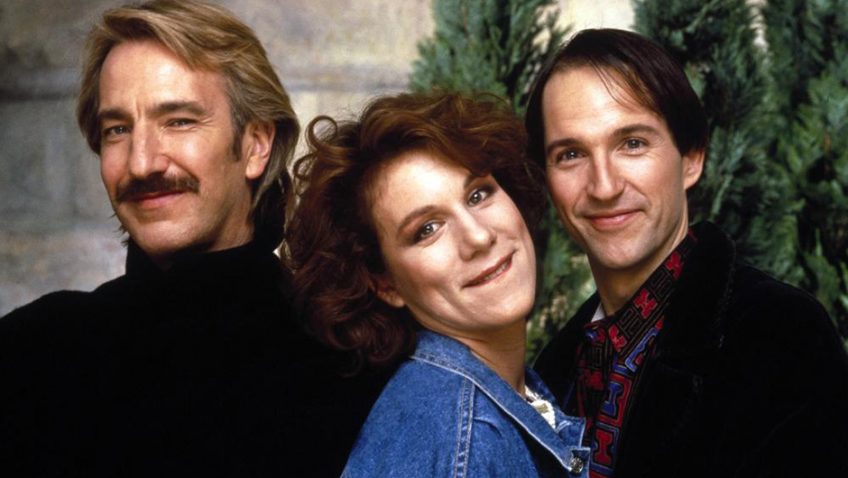 Truly Madly Deeply (BBC). There is the reality and fantasy. The reality is that a man (Alan Rickman) has died and his lover (Juliet Stevenson) cannot get over her grief, the pain is so deep. The fantasy is that he returns as a ghost and she is happy once more. The only downside is that he brings along his ghost friends and they take over her house. How would you cope with bereavement? Do you believe in life after death? Many people have found Anthony Minghella’s 1990 film therapeutic. Stevenson gives a brilliant performance, alternating grief, rage and joy. The film has an added poignancy now in the knowledge that Rickman and Minghella both died young.

Murder on the Orient Express (20th Century Fox). It’s one of Agatha Christie’s most famous crime novels. Everybody knows who did it. So the only thing the actors have to do is to flesh out the characters and make them interesting which this cast singularly fail to do. Kenneth Branagh directs and plays Poirot with a walrus moustache. The film ends on a surprisingly serious note which has nothing to do with Agatha Christie at all. The 1974 Sidney Lumet film had a much better cast: Lauren Bacall, Martin Balsam, Ingrid Bergman, Jacqueline Bisset, Jean Pierre-Cassel, Sean Connery, John Gielgud, Wendy Hiller.

Le Corbeau (StudioCanal) was made by Henri-Georges Clouzot in 1943 during the Nazi Occupation. Anonymous poison-pen letters, signed Le Corbeau (the raven) are being delivered daily in a small village in France. A doctor (Pierre Fresnay) is accused of having an affair and carrying out abortions on women he has impregnated. The film was banned after the Liberation. It was thought to be anti-French; it was an unpleasant reminder of the climate of denunciation during the Occupation, the hatred and the calumny. There had been many informers who wrote letters to the Nazis. There is a striking expressionistic scene when a woman, falsely accused of writing the letters, flees, fearing she will be lynched by the mob. There is a scene-stealing performance by Pierre Larquey.

Quai Des Orfevres (StudioCanal), directed by Henri-Georges Clouzot in 1947, has two main settings: the music hall and the police station. A jealous pianist (Bernard Blier) decides to kill a film producer (creepy Charles Dullin) whom he believes is sleeping with his wife, a chanteuse (Suzy Delair), only to find that he has already been murdered. His wife thinks she killed him with a champagne bottle. But he died from a bullet. Will the police (Louis Jouvet) find the real criminal and save her from the guillotine?

La Prisonniere (StudioCanal) also known as Woman in Chains was Henri-Georges Clouzot’s last film (1968) and one few people will want to watch. The wife (Elisabeth Wiener) of an artist (Bernard Fresson) falls in love with an impotent art dealer (played by the charismatic Laurent Terzieff) who is a pervert and whose apartment is full of erotica and as crowded as his gallery which exhibits kinetic art. The wife observes and participates in one of his S&M photographic sessions. The film is at its best when Clouzot gets inside her petit bourgeois mind with a sequence of surreal images.