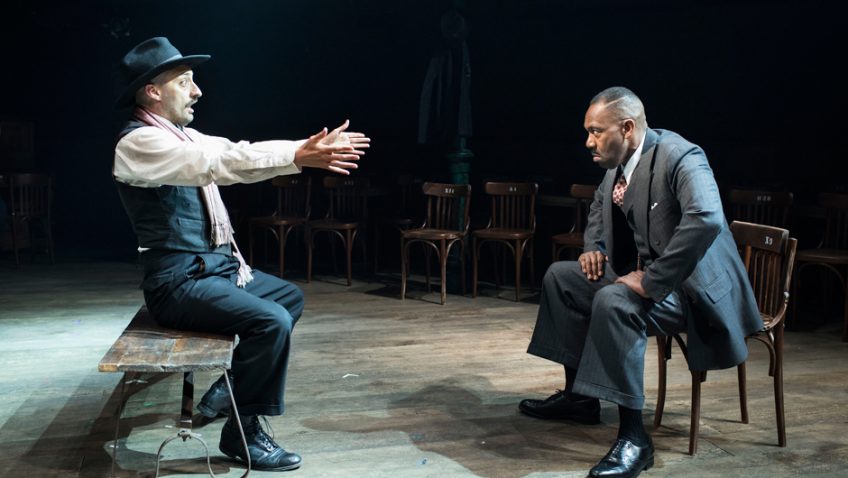 Bertolt Brecht’s satire on the rise of Nazism, written in 1941; but not staged until 1959, three years after his death, is a pantomime of the most savage kind.

Brecht and his family had fled Berlin, following the burning of the Reichstadt in 1933.

He said the aim of his parable was to destroy the usual disastrous respect we feel for great murderers by exposing them to ridicule. He equated Hitler and the Nazi Party with Al Capone and a mob of gangsters in Chicago Lenny Henry in The Resistible Rise of Arturo Ui

Arturo Ui is a terrific role.

At its London premiere in 1969 Leonard Rossiter’s schizophrenic performance – going from calm to hysteria in seconds – was one of the great virtuoso performances of the 20th century and made his name.

The play’s most famous scene is the one in which an actor of the old school, steeped in hammy Shakespearean rhetoric, tutors Ui in the art of elocution and deportment, and converts a small-time hoodlum into a fist-pounding, goose-stepping, Fascist-saluting, ball-grabbing, ranting Hitler.

The scene is much diminished here because it doesn’t go the whole hog. Similarly, the final oration should be on a par with the real Hitler ranting at the Olympic Games in 1936 and Charlie Chaplin’s caricature of Hitler ranting in his 1940 film, The Great Dictator; but it isn’t.

In this adaptation by Bruce Norris and in this cabaret production by Simon Evans, Hitler is notable for his absence. Instead there are jokes about Donald Trump and his building walls and making the country great again.

Lenny Henry has the authority and power to be a convincing mobster; but if The Resistible Rise of Arturo Ui is not about Hitler, then what is the point?

Brecht wanted the production to be staged on the Grand Scale. At the Donmar it all takes place in the round in a grubby speakeasy and the audience is used and abused.

A theatergoer is dragged on stage, put on trial and beaten up. At one point the audience is ordered to stand up and most of them do.

Justine Mitchell has an excellent scene with Ui which mirrors Shakespeare’s scene when Richard III courts the widowed Lady Anne over the coffin of her husband whom he had murdered.