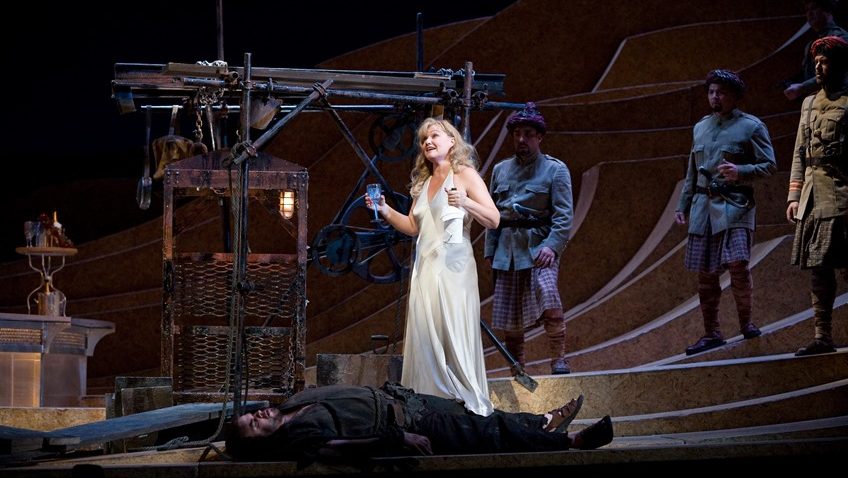 SALOME, Oscar Wilde’s pseudo-biblical shocker, based on the Gospels of Matthew and Mark, was written in French in Paris in 1890, under the heady influence of Flaubert, Maeterlinck, Mallarme, Moreau, Massenet and the Symbolist movement.

In 1892 in the middle of rehearsals the Lord Chamberlain banned it. He objected to biblical characters appearing on the stage. Sarah Bernhardt, who was to have played the leading role, was understandably angry. Wilde announced he was going to renounce his British citizenship.

Richard Strauss’s opera is more than equal to the play’s gaudy, decadent vulgarity. There were 38 curtain calls at the premiere in Dresden in 1905. The critics thought it ideal entertainment for homosexuals and lesbians and masochists and sadists.

Critics and public at the American premiere at The Metropolitan in New York in 1907 found the opera horrible, disgusting, revolting, abhorrent, bestial and loathsome.

They were so shocked by The Dance of the Seven Veils and Salome kissing the severed head of Jokanaan that the production was withdrawn after a dress rehearsal and one performance. There were no further performances at the Met until 1934.

Jűrgen Flimm’s production for The Met, conducted by Patrick Summers, dates from 2008. It has a fine cast and a great performance, notable for its raw power and stamina, from Karita Mattila.

Salome wears a silk evening gown. Herod wears a white suit and looks like Sydney Greenstreet. Herodias looks like a grand horizontal. The only Biblical-looking character is Jokanaan, who is given a wonderful entrance by Strauss

Wilde wanted to see Salome nude on stage. Karita Mattila obliges. (Marie Wittich in Dresden in 1905 refused even to dance: “I won’t do it. I am a respectable married woman.”)

Mattila is no 16-year-old. Her Salome is a grown woman who still behaves like a child, a spoiled, neurotic teenager. Indifferent to the young Syrian officer (Joseph Kaiser), who loves her, she lusts after chaste Jokanaan (Juha Uusitalo) and taunts Herod (Kim Begley) until she gets what she wants – Jokanaan’s severed head

The Dance of the Seven Veils (a Wilde invention) is rethought and turned into a tacky, decadent Berlin cabaret with two male dancers in tuxedos giving Salome a lift and helping her striptease

The opera and indeed the play ends with the guards crashing Salome under their shields. Flimm’s production disappointingly ends with the executioner merely advancing on her with raised sword. She stands there, stoically uncovering her neck. It hasn’t the same power.

NB. Great news for opera goers. Every night the The Metropolitan New York is streaming a different opera for free. To find out what is on click here.