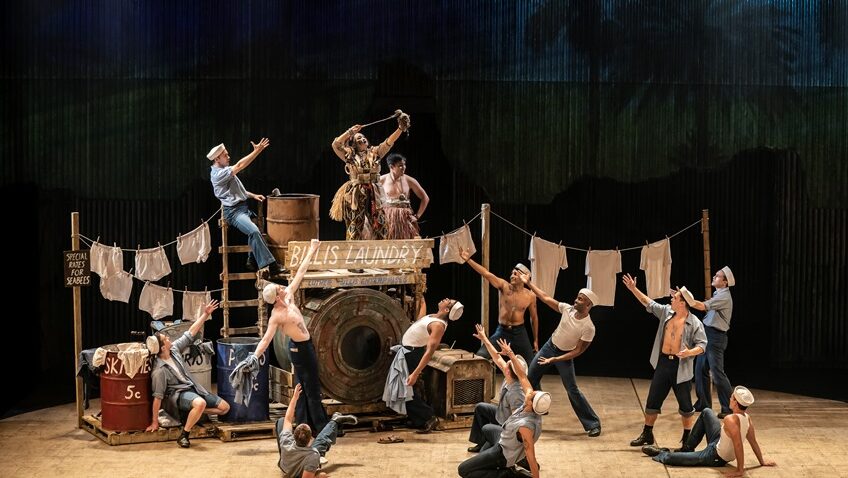 It has a wonderful emotional score. The songs include Some Enchanted Evening, Younger Than Springtime, I’m in Love with a Wonderful Guy, I’m Gonna’ Wash That Man Right Outta My Hair and There’s Nothing Like a Dame.

The book, based on James Michener’s Tales of the South Pacific, narrates two wartime romances set on the islands of Samoa during World War II. The very idea of mixed marriages caused problems for the show when it toured the Southern states in the early 1950’s.

But South Pacific is not a racial musical. It deals with racism and Daniel Evans’s production, originally seen at Chichester Festival Theatre last year, confronts the racial prejudice head-on, from the very start, during the overture.

Nellie (Gina Beck), a young US Navy nurse, falls in love with Emile (Julian Ovenden), a middle-aged and cultured French plantation owner whose favourite reading is Marcel Proust and Andre Gide. She has no difficulty whatsoever in accepting Emile had once killed a man; but she does balk at the idea of marrying him when she learns he had married a Polynesian woman and has two children by her. Nellie was born in Little Rock, Arkansas, which would, in 1957 become notorious for race riots.

The cultural differences between them are characterised by two different theatrical genres. Her songs belong to the world of the musical comedy stage; whilst his songs are much nearer to the world of opera. The high spot is Julian Ovenden singing This Nearly Was Mine.

A young lieutenant (Rob Houchon) falls in love with Liat (Sera Maehara), a 17-year-old native girl, knowing full well that the folks back home would never accept a woman of colour as his wife. He has the show’s key indictment of racism when he sings “You gotta be carefully taught to be afraid of people with different skins.”