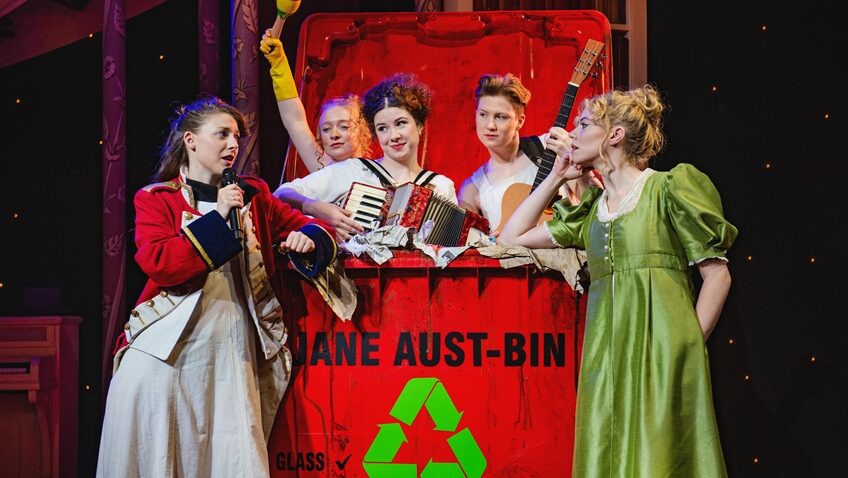 It is a truth universally acknowledged that a single man in possession of a fortune must be in want of a wife. Jane Austen’s Pride and Prejudice, published in 1813, has been staged and filmed many times, especially on television. Its popularity is undiminished.

Actors who have played Elizabeth Bennett and Darcy include Celia Johnson and Hugh Williams in 1936, Greer Garson and Laurence Olivier in 1940, Jennifer Ehle and Colin Firth in 1995 and Keira Knightley and Matthew Macfadyen in 2005.

They are now played (no doubt to the surprise of Janeites) by Meghan Tyler and actor / writer Isobel McArthur in an all-female adaptation. McArthur also plays Mrs Bennett in an excellent double-act. She has also directed this clever and witty karaoke production with Simon Harvey.

The cast includes Tori Burgess, Christina Gordon, Hannah Jarrett-Scott, five talented women in all, who can act, sing and play musical instruments, harp, piano, accordion and trumpet. They wear Regency clothes but they speak and swear like modern girls. The audience loves the girls swearing and the ruder they are the more they like it.

The conceit is the girls are servants aping their masters and mistresses and their performances veer more in the direction of the 19th century caricatures of James Gillray and Thomas Rowlandson. Mr Bennett remains out of sight, reading a newspaper in an empty armchair with its back to the audience. The only characterisation which feels too far removed from Jane Austen is Mr Collins.

The production is not only remarkable for its cross-dressing but also for its pace, timing, amazingly quick costume changes and comic business. It’s a lot of fun and one of the high spots is Darcy’s initial singularly unromantic and appallingly tactless proposal of marriage.