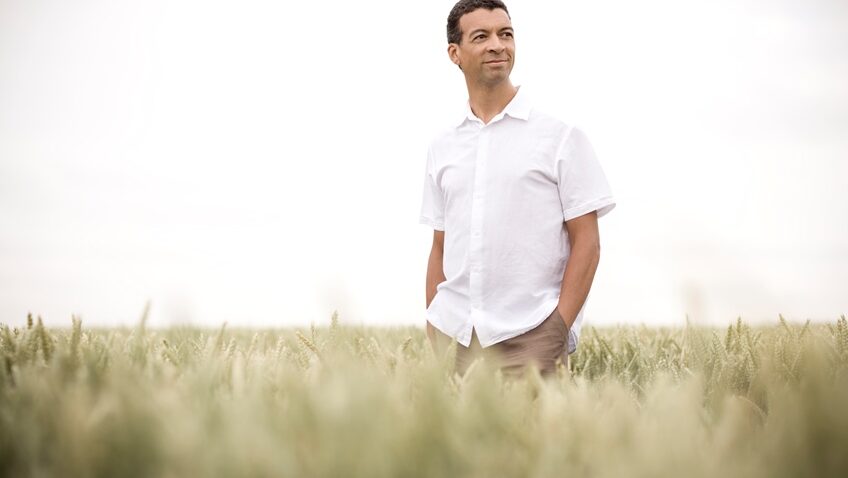 Brimming with the overwhelming delight of singing again at last in the magic of in-the-round intimacy, Roderick Williams quickly spread his joy throughout the auditorium, his singing and compelling delivery finer and more powerful than ever.

And that’s not all. Our BOGOF baritone deal offered two resonant voices for the price of one! As part of Momentum, a project devised in the light of the crushing effects of a pandemic that has decimated artists’ opportunities to perform, Gareth Brynmor John shared the bill. By pairing performers with fellow singers like this, Momentum enables twice as many to work. So thrilled was the masked audience, all carefully spaced and “out of the spit-zone” (as Mr W put it) they got busy with ample applause and foot-stomping to bring on a lovely, wistful To Lizbie Browne encore.

Relaxed and beaming, Roddy Williams OBE, internationally revered singer, composer and Music in the Round’s Singer-in-Residence since 2016, had to confess that Thomas Hardy’s poems aren’t his, or his wife’s, favourites, but A Thomas Hardy Songbook includes such a broad range of mighty composers who have set Hardy’s words to music that it’s a pleasure to sing. Tonight’s selection? Holst, Vaughan Williams, Ireland, Venables, Bax, Weir, Gurney, Burton, Wood, five Benjamin Brittens and an entire Before And After Summer section and encore piece by Gerald Finzi.

Taking turns, the singers artistically shaped each mini-drama, each different setting, conveying moods and emotions from jaunty joy and idyllic, magical wonder, through deep musings and puzzling, philosophical questions to darker moments of regret, resignation, grief and lament – all thoughts that strike home with extra relevance and poignancy in these times of world crises. With odd laughs along the way, we ponder on love, on a kiss; on war, death, sorrow and nostalgia, on the intransigence of life, on nature, cider, dancing, and people on trains. All of life, as they say, is there.

So it’s no mean feat for a singer to conjure up, in an instant, a fresh mood and atmosphere that ensures each separate tale springs to life and captivates the listener. It’s all an obvious joy, though, for Roddy, Gareth, and Christopher Glynn, the pianist who so often accompanies Mr Williams. Living the emotions and events of each story, each scene, they bring it vibrantly into the present, ever eager, ever hungry to share its every detail, its every nuance with each and every listener, as if each were an old acquaintance to whom they’re dying to relate their intense experience face to face in a way that’s intensely dramatic but never over-dramatic.

In Great Things, set to music by John Ireland, Gareth Brynmor John’s joyful face has us believe that sweet cyder, dance and love really are the greatest things for him, while in Gurney’s Battle of Trafalgar his deep tones express genuine lament and dismay. As always, Williams perambulates the little arena, catching every eye and ear with his gripping storytelling and dramatic delivery: superb acting in every facial and bodily gesture and stance is combined with meticulous enunciation and a stunning ability to paint subtle, riveting pictures through skillful, intricately shaped musical textures, expressive tones and dynamics that mirror mood and meaning. Ditto Chris Glynn’s piano-playing as he likewise immerses himself in each emotional journey and shapes his emotive playing. In Judith Weir’s composition for Written Of Terrestial Things the piano accompaniment is so captivating it almost outdoes the words in vying for attention, its initial silences and sparse bleakness reflecting the cold, grey desolation until a thrush sings, jubilant, full of a joy and hope, that somehow the poet has hitherto failed to find. On Midnight on The Great Western, Benjamin Britten’s train travels smartly along on the keyboard, interspersed with more philosophical thoughts: where is the child going? Indeed, where are any of us going? The intriguing story of the boy violin player, the convict and the constable is but one more of the many riveting tales.

In short, compelling artistry and sensitivity in every word and note ensure that every listener is delighted to be there.