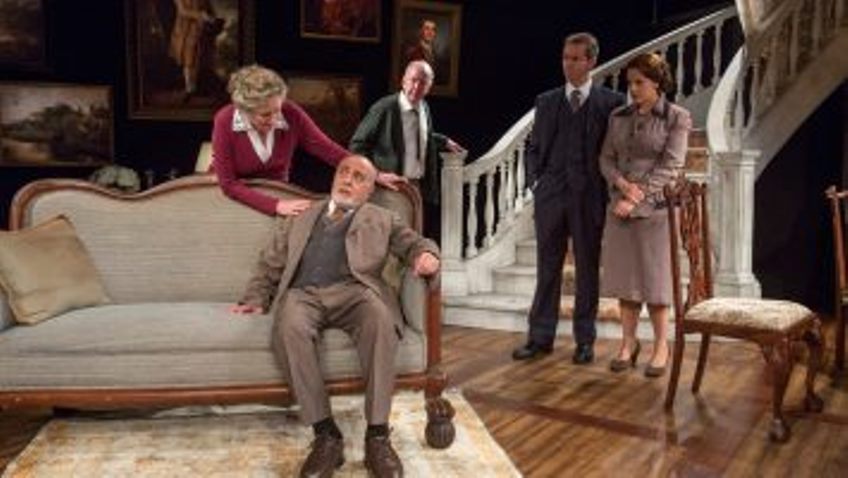 If I lived in New York, I would be a regular theatregoer at The Mint Theatre whose mission is to revive the plays of neglected writers. Production standards are high.

English playwright N C Hunter’s A Picture of Autumn had a one-night stage performance by the Repertory Players at Duke of York’s Theatre in February 1951. No West End producer took it up.

In December 1951, Hunter’s Waters of the Moon premiered at Theatre Royal Haymarket with Edith Evans, Sybil Thorndike, Wendy Hiller, Kathleen Harrison and Cyril Raymond. It ran for 835 performances and still nobody took up A Picture of Autumn.

Hunter’s A Day by the Sea followed in 1953 with John Gielgud, Ralph Richardson, Irene Worth, Sybil Thorndike and Lewis Casson. It ran for 386 performances and would have run longer had not Gielgud become ill.

There was a recording of A Picture of Autumn on BBC Radio in 1961 with Thorndike and Casson and that was the last it was heard of until Mint Theatre staged it in 2013. Gus Kalkkonen’s handsome production was recorded live. The play is well cast.

N C Hunter (1908-1973) loved the plays of Anton Chekhov. A Picture of Autumn pays homage to Chekhov’s The Cherry Orchard and in the same way that Chekhov’s orchard is a metaphor for Russia at the turn of the 20th century so is Hunter’s manor house a metaphor for Britain in decline post-World War II.

Three old people, a married couple (Jonathan Hagon and Jill Tanner) and the husband’s elder brother (George Morfagen) have lived in their ancestral home all their lives. The house, built in 1762, is too big (18 bedrooms) and inconvenient for them to run. The building and the acres of garden are rotting and they haven’t the money to make the necessary repairs. What should they do? What would be best? Should they stay or leave? They vacillate when they should act.

Their son (Paul Niebanck) thinks they should sell the house and estate to the government who want to convert it into a technical college for agriculture. They know they should go. But they have lived there all their lives. The wrench is too great.

I am surprised A Picture of Autumn was not taken up in the 1950’s. There’s a great role for a great actor. George Morfagen is excellent as an elderly upper crust gent who knows he is an anachronism.

You can find out more by visiting the theatre’s website by following this link.