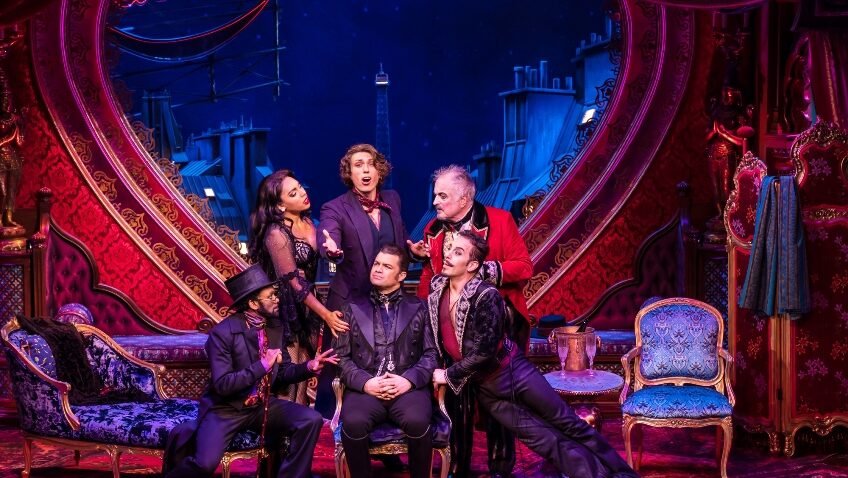 Moulin Rouge, the multi-award-winning 2001 film, directed by Baz Luhrmann, starring Nicole Kidman and Ewan McGregor, has been turned into an extravagant and spectacular Broadway musical, comprising 75 songs which are credited to 165 songwriters and represent 160 years of music.

Moulin Rouge! The Musical is directed by Alex Timbers, choreographed by Sonya Tayeh and lit by Justin Townsend. Derek McLane designed the scenery. Catherine Zuber designed the costumes. The book is by John Logan.

The show is notable for its lavish spectacle and for its raucous energetic dance numbers. The opening number gets the production off to a terrific start. The opening to the second act is another show-stopper. Best of all is the curtain-call, an absolute knock-out, which will send everybody out of the theatre in a good mood.

The Piccadilly Theatre been transformed into a glitzy and very opulent Moulin Rouge with red (rouge, bien sûr) velvet, lots of chandeliers, a windmill in one stage box and a massive blue elephant in a stage box on the opposite side

The real Moulin Rouge, founded in 1889, was made famous by the can-can and the posters of Toulouse-Lautrec. It was a nightclub where aristocrats, Bohemians, boulevardiers and reprobates could freely come together and enjoy the cabaret by the leading artists of the day, such as La Goulue, Jane Avril, Yevette Guilbert and Valentin.

An American songwriter (Jamie Bogyo, making his Wet End debut) falls in love with a French singer (Lisi La Fontaine). He is gauche and penniless. She is very sexy; but unfortunately, she is dying of tuberculosis and beholden to a very rich Duke whose patronage is saving the Moulin Rouge from bankruptcy.

Clive Carter is excellent as Harold Zidler, the louche impresario and host of the Moulin Rouge. Jason Pennycooke can always be relied on to give a scene-stealing performance and he does so again, playing Toulouse-Lautrec.