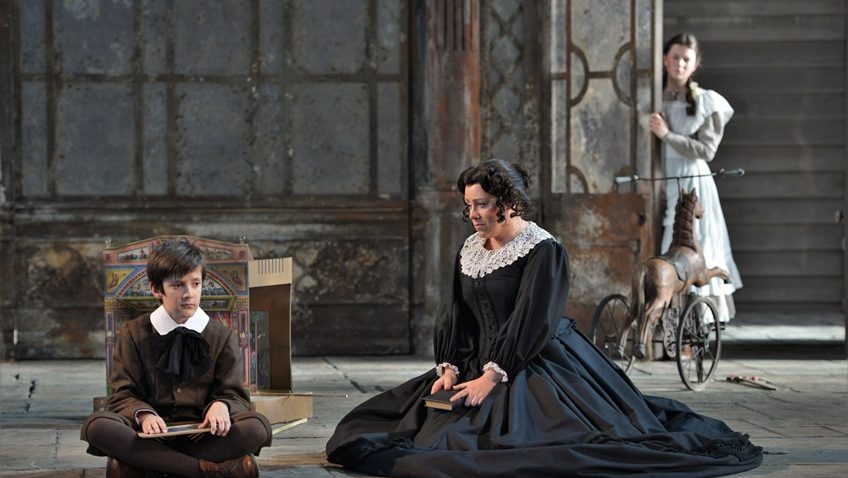 Robert Tanitch reviews Garsington’s The Turn of the Screw on line.

For those who like a good ghost story Henry James’s chilling novella, published in 1898, is one of the very best. Oscar Wilde was greatly impressed by it and thought it “the most wonderful, lurid, poisonous little tale.” James, subtly, built up a sense of evil without ever stating what the evil was.

Peter Quint, a former valet, and Miss Jessel, a former governess, return from the dead, to haunt the house in which they were once employed. They frighten the life out of the new and young governess, who senses their evil and desperately wants to protect her two young charges, Miles and Flora. She is too late. They have already been abused and demonised

All his life Henry James wanted to be a successful playwright; and, ironically, he only achieved his ambition after his death. His novels and short stories have been regularly turned into highly successful plays, films and operas.

There have been two films of The Turn of the Screw. Jack Clayton’s The Innocents in 1963, with Deborah Kerr as the governess, is infinitely preferable to Michael Winner’s sensational prequel, The Nightcomers, in 1973, which left nothing to the imagination. Marlon Brando played the menial, brutal, depraved Quint

James wanted it to be ambiguous; and it is the ambiguity which is the story’s great strength.

He freely admitted his story was “a trap for the unwary.” Freudians and anti-Freudians have had a field day ever since.

Garsington Opera is a summer opera festival, housed in Wormsley Park. Near Stokenchurch, High Wycombe, in Buckinghamshire. It stages well-known operas and new commissions. The theatre is a modern open pavilion in the grounds of a stately home.

Sophie Bevan’s very agitated governess is lost in the labyrinth of her own making, which began when she fell in love with the young and handsome guardian of the children who employed her on the condition, she never wrote to him. The guardian is never seen.

The ghosts don’t speak in the novel. They sing in the opera. Ed Lyon and Katherine Broderick are powerful presences, vocally and physically. Adrianna Forbes-Robertson and Leo Jemison are the children. Flora seems the most corrupted of the two; especially when she is playing with a doll.

Opera North had the half-naked 11-year-old Miles kissing the governess fully on the lips and then jumping into bed and inviting her to join him. There is nothing as shocking as that in Louisa Miller’s production but the opera still remains a deeply disturbing experience. Britten’s score is so perfect, it couldn’t be otherwise.

You can find out more about Garsington Opera by clicking on this link.