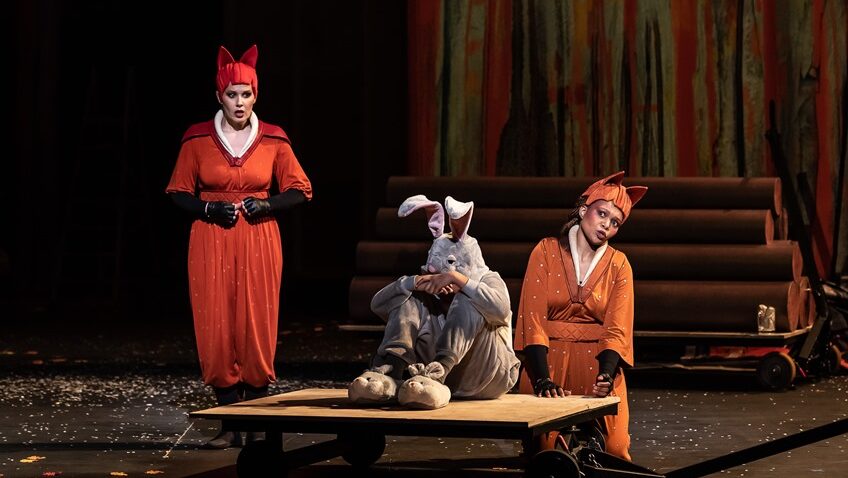 Leos Janacek’s The Cunning Little Vixen, which premiered in Brno, Czechoslovakia in 1924, is based on a cartoon strip, which appeared in a daily Brno newspaper. There are two worlds: an animal world and a human world.

Janacek was a composer who listened to the sounds of nature, birds, trees and bumblebees. The opera, a cycle of life and death, had its English premiere by ENO in 1961.

Jamie Manton’s production, conducted by Martyn Brabbins, the first for ENO since David Poutney’s production in 2001, was meant to open on Friday 18th February but Storm Eunice put a stop to that and it was postponed until Sunday.

A forester tracks and captures a vixen and brings her home and keeps her as a pet. The vixen escapes, kills a cock and slaughters all his hens. She meets a fox and they have sex. She gets pregnant and six cubs are born.

The opera, described by Janacek as “a merry thing with a sad ending”, has its lyrical and tense moments and there are strong performances by Sally Matthews as the vixen, by Lester Lynch as the forester and by Ossian Huskinson as the poacher.

Children from Westminster primary schools play the wild life, frogs, animals and insects. Childishly cute, they run around, often comically awkward, and upstage the drably dressed humans. The costumes for the Cock (a blaze of colour) and the Dog (a ball of fur) are fantastic. The chicks look like child-brides. The designer is Tom Scutt.

The stage, initially very open and very large, is very ugly. The rolls of painted fabric descending from the flies are interesting to look at. The heavy trucks, with rolls of logs to sit on or climb, are wheeled about the stage too much. Manton’s production is over-busy

The forester has a hymn to Nature, a mouthpiece for the 70-year-old Janacek, who enjoyed and recognised the importance of Nature. Awed and enriched by its wonders; though he was, he nevertheless, did not allow himself to get sentimental. The vixen is shot by a poacher and dies.