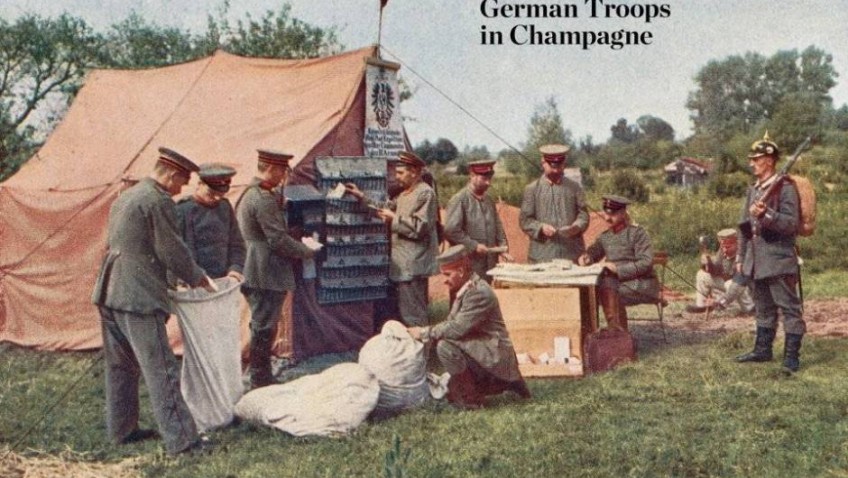 Robert Tanitch reviews books on The Great War, Football in the 70s and acting in Shakespeare

THE FIRST WORLD WAR IN COLOUR by Peter Waither (Taschen £34.99). For those of us brought up on pictures of the Great War, either in photographs or in the cinema, the image has always been stark black and white. Few will have seen the War to End all Wars in colour. This collection is fascinating precisely because it is in colour. It gives quite a different perspective. The images feel more like a record of manoeuvres than war. Some street scenes recall the Impressionists. The images are, disconcertingly, almost too pretty, too post-card-like, too beautiful, in their pastel colours; even the bombed buildings look quaint and unreal.

The bombed town hall of Arras looks magnificent. Just occasionally there are images which remind you of Paul Nash’s landscapes; but often you wouldn’t know a war is raging.  Only a small handful of photos actually disturb and upset. It is left to the captions (extracts from diaries) to record the obscene losses of life and ask “what is the point of slaughter and murder, over and over?” There were over 16 million deaths and over 20 million wounded.

THE AGE OF INNOCENCE. FOOTBALL IN THE 1970s edited by Reuel Golden (Taschen £39.99). This large format, friendly, exuberant and colourful photographic tribute to the beautiful game will have a nostalgic appeal for many fans. There are photographs of the players on and off the pitch, with girl friends and families. Bobby Moore and Pele exchange shirts. George Best stands outside one of his boutiques. 15-year-old Maradona packs his suitcase. Muller and Brietner puff their cigars. Kevin Keegan grabs a ball.

There is a photo of Argentinean soldiers ready for the fray. But there is no fray in this book. The fans are well behaved There is only one arrest. There’s nothing untoward on the pitch, no foul play, no phoney agonies. It’s another age, another more innocent era. And what can be more innocent than a photo of naked players in the showers and a photo of two team-mates sharing a double-bed?

COVERING SHAKESPEARE by David Weston (Oberon £14.99). Weston, who had an award-winning success with his actor’s memoir, Covering McKellen, has now written another enjoyable and informative memoir in which he remembers the roles he has played (and not played) and actors he has seen in the roles. He carries his knowledge of theatre history with a light touch.  Weston, a jobbing actor, too rarely offered a job or a good role, writes amusingly about rehearsals and performances.

“I must be the only actor who never wanted to play Hamlet… I wish I had a pound for all the parts I didn’t get.” The glittering career never arrives. He lambasts Peter Hall: “I found him an intellectual director without heart, only concerned with the speaking of the verse and the marking of end pauses. He would spend much of the rehearsal looking down at the text and not at his actors.” He found working with Trevor Nunn much more fulfilling. Actors and theatregoers will enjoy this book.