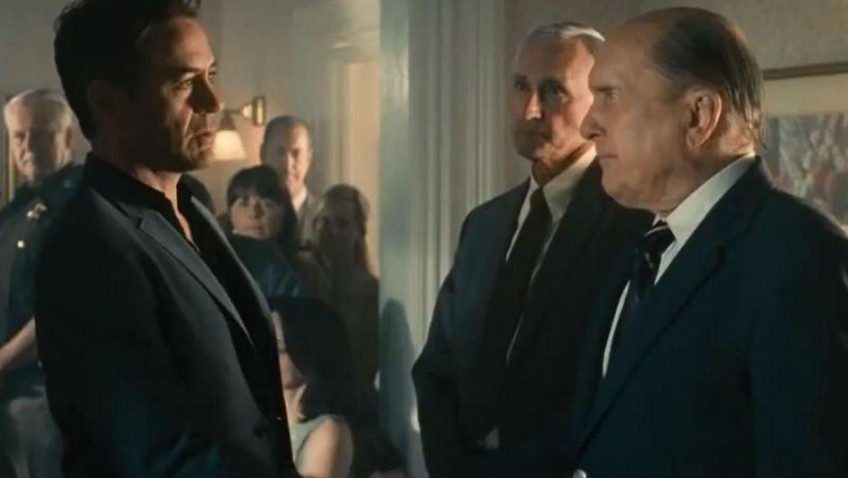 It is perhaps inevitable that the world’s highest paid actor and his high-powered former studio executive wife, Susan Downey, would unite to form their own production company.  Team Downey’s first production is the Judge, which is produced by its star, Robert Downey Jr, his wife, and the film’s director, David Dobkin (The Wedding Crashers).

Despite the terrific cast, from Academy Award winning actor Robert Duvall (Tender Mercies, The Godfather) and Downey Jr, (Iron Man, Zodiac, The Singing Detective, Chaplin) to an immensely talented if underused Vera Farmiga (Up in the Air), Vincent D’Onofrio and Bill Bob Thornton, the film needed an objective outsider to curb its self-indulgences.

Robert Downey Jr. is Hank Palmer, Chicago’s top defence lawyer. He is an expensively-dressed portrait of self-confidence, if not manners, as a short, stocky public prosecutor is sprayed with Hank’s ‘misdirected’ urine in the court men’s room.

‘How does it feel to know that everyone you represent is guilty?’ asks prosecutor with venom. ‘It’s fine,’ Hank retorts, ‘Innocent people can’t afford me.’   Hank has even less respect for his white collar criminal clients; which is just as well as the audience is supposed to like Hank.

When news comes that his mother has died, Hank returns to his architect-designed house, his precious daughter (Emma Tremblay) and his young and gorgeous wife.  But things are not as perfect as Hank had boasted in the court men’s room.

His lonely wife is having an affair and a custody battle looms.  And Hank drives off alone to Carlinville, Indiana (muttering ‘nothing changes’), a beautiful, small town where the Palmer family has deep roots that Hank has cut.

Hank’s brothers, Glen (Vincent D’Onofrio), whose baseball career was curtailed by a car crash, and Dale (Jeremy Strong) who is mentally challenged, live under the strong arm of their father, Judge Joseph (Duvall), a pillar of the community for 42 years.

The first thing Hank does (for our sake more than for his) is to stop by the court house where, coincidentally, Joseph is just finishing a Judge Judy type trial. This scene is meant to contrast Joseph’s straightforward brand of old fashioned justice and Hank’s ‘I respect the law, I’m just not encumbered by it’ mantra. This is one of several wedges that have driven the men apart.

The plot kicks off when Joseph is charged by the police for a hit-and-run of a convict he had sentenced and who had recently been let out of prison.  Joseph reluctantly accepts Hank’s offer of help, a decision which not draws a top prosecutor (Billy Bob Thornton) into the mêlée, but keeps Hank around long enough for family secrets to spew forth like outtakes from a soap-opera.

But every story needs a love interest, which is where Vera Farmiga comes in. She is Sam, still at the town diner where Hank last saw her some two decades previously.  Now she owns the diner, but still holds a torch for Hank, who might even be the father of Carla (Leighton Meester) a pretty, precocious teenager with whom he ‘made out’ upon his arrival in town.

Although the film is entitled the Judge, it is Downey Jr who is in every scene and through whose eyes we see the story.  Although both father/judge and son/lawyer go on a journey that changes their lives and their relationship, Joseph’s story never takes centre stage.

Joseph is 72 in the film, no doubt to explain why he is still working, but he clearly looks a decade older (Duvall is 82). This ageing could be the effects of his father’s hidden illness which Hank discovers so dramatically during the trial.

Ever since Arthur Miller’s All My Sons (1947) and Death of a Salesman (1949) hit Broadway, father and son stories have been a regular fixture in American theatre as well as cinema.  They are universal stories, but, on the big screen, at least, are not easy to pull off.

One of the best father/son stories to hit the screens recently was Alexander Paine’s Nebraska.  In this case, writers Nick Schenk and Bill Dubuque script borders on melodrama that, in a woefully dragged-out and even clichéd, ending, turns to sentimentalism.

Duvall gives the role his all, and when he and Downey Jr. are sparring and snapping at one another, closing in and then drawing back when the hurt inflicted would be intractable, the film hits a high note.

The Judge did not shout out for Downey Jr. in the role of the troubled son, and sometimes you hear a bit of Tony Stark in his repartee.  This is hardly Downey’s most memorable film, but he’s a charismatic, expressive star who keeps you glued to the screen.