Home / NEWS / CAMPAIGNS / The Professor and the big swim 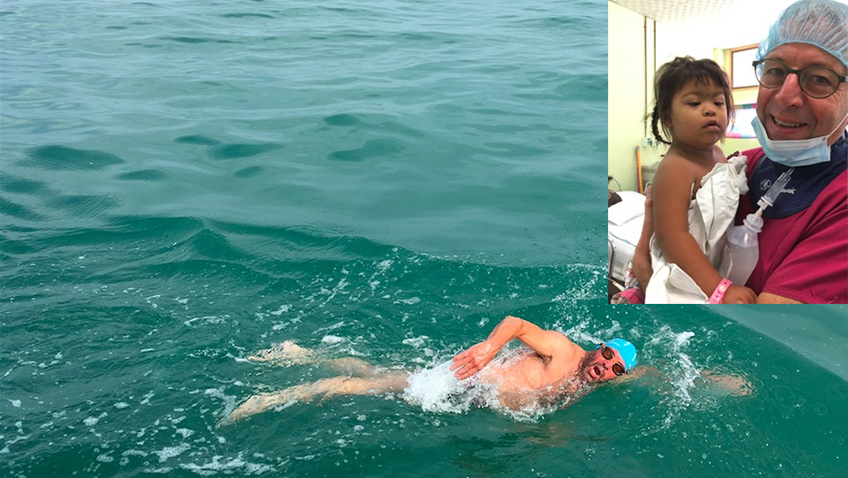 The Professor and the big swim

Professor Andy Wolf worked as a consultant paediatric cardiac specialist at Bristol Children’s Hospital for over 20 years. Now, aged 63, he is set to become one of the oldest people to take on a solo swim across the English Channel, in a bid to raise funds for cutting-edge hospital equipment.

‘I came to Bristol in 1995 to help set up a new Paediatric Cardiac Surgical Unit at The Bristol Royal Hospital for Children. We operate on over 400 children in the South West and Wales each year, pushing the boundaries of what is possible through the efforts of a dedicated and wonderful team.

I’ve seen rapid developments in paediatric cardiac surgery and a dramatic reduction in mortality rates over the last 20 years and now new cutting edge technology is enabling individualised 3D paediatric heart reconstructions for children with congenital heart disease. This development is transforming our abilities to plan and undertake complex cardiac procedures and I know first hand the difference that this will make to children suffering with complex cardiac conditions. Future development of this technology will ultimately allow us to make tissues using a baby’s own cells, enabling us to repair tissues using bioprinting.

So whilst continuing to work with Professor Massimo Caputo in Bristol and Chicago on developing this technology, I decided to raise funds for a 3D paediatric heart reconstruction facility at Bristol Children’s Hospital. In August this year, I will take on one of the toughest challenges of my life: to swim solo across the 21 miles of the English Channel.

A competitive swimmer since the age of 10, I was a junior and senior international for Great Britain in butterfly and the individual medley, and in 1976 was Great Britain Student Swimmer of the Year. Since retiring from clinical practice in 2016, I have returned to swimming and was team manager and swimmer in the Bristol Children’s Hospital relay team that successfully swam the English Channel in 2017. Now aged 63, I will be one of the oldest solo swimmers to attempt this challenge.

I will be swimming the Channel from Dover to the French Coast in the fashion of Captain Webb, who was the first to complete this challenge in 1875. Wearing just swimming trunks, a hat and goggles, and in water temperatures that vary from 15 to 17 degrees centigrade, this will be a tough challenge indeed. Since Captain Webb’s 1875 success, only 1600 individuals have completed the swim and it remains one of the great endurance swimming challenges. To put it into perspective, 4,000 people have stood on the top of Everest.

The straight-line distance from Dover to Cap Gris Nez is 21 miles, but with the strong currents of the English Channel to contend with, the actual distance will be more like 30 miles, a distance that can take over 15 hours. The Channel is one of the busiest shipping lanes in the world and the skilled pilots who guide swimmers across have to dodge container ships to keep the swimmer both safe and on the optimum track through the currents.

The rules, as set out by the Channel Swimming Association, try to faithfully recreate the challenge of Captain Webb’s original swim. Swimmers are not allowed to touch the pilot boat once the challenge is underway and so food is provided by the support crew via a fishing line or pole. Attempts are usually made between June and September, when sea temperatures are usually above 14 degrees centigrade. The main hazards are hypothermia, exhaustion, jellyfish and seasickness. Channel swimming also involves swimming in the dark and on a rolling bumpy sea, which I confess remains a bit scary!

Much of my training has been undertaken at the Clevedon Marine Lake and to condition my body to swimming in cold water, I swam during the winter with temperatures as low as 0 degrees centigrade. Now summer is here the lake water temperature is too warm and I have moved my training to the cooler waters off Brixham. Swimming for up to 10 hours at a time, this last month I swam over 120km but can look forward to swimming a little less as my challenge approaches in early August’.

As Andy’s challenge date approaches, please join us in wishing him a safe and successful swim.

If you’d like to find out more and see details of Andy’s training progress, please visit Andy’s Facebook Blog: https://www.facebook.com/professorandywolf

If you’d like to support Andy in his challenge and raise funds for paediatric cardiac development in Bristol and the South West, you can make donations at: https://www.justgiving.com/fundraising/solochannelswim2018