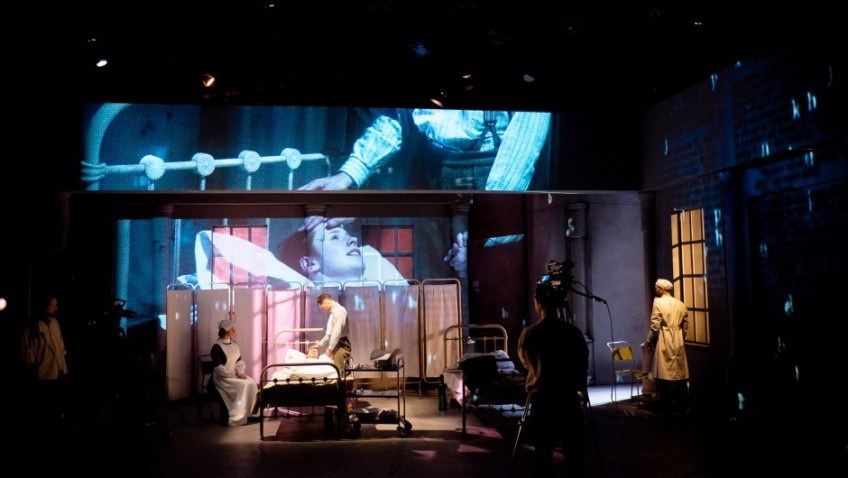 A praiseworthy performance of a Farewell to Arms

A FAREWELL TO ARMS FROM IMITATING THE DOG CAST, DONCASTER Oct 29th 2014

From a company “at the forefront of testing the nature of theatre”, this new stage version of A Farewell To Arms passes many of its own ambitious tests with flying colours. By the end, an audience, somewhat bemused at times, can do nothing but sit in awed silence and admiration before finally applauding loud and long.

Courtesy of six multi-tasking actors and a mighty barrage of theatrical, musical and technological innovations, it’s Hemingway’s text that takes the star role, its unique style playing centre stage throughout. It’s an iceberg style, stark, minimalist, punchy, direct, the words at the surface suggesting a whole world of complexities beneath, as the grim reality of war gives way to the cruelty of Fate in a world that is senseless, unstable and unjust even without war.

We are in Italy in the final year of World War One, the stage set with the stark beds, cracked white tiles and shabby nursing screens of an abandoned military hospital. Surprisingly, revealed as their cloth covers are removed, two modern-day cameras on tripods sit there too. Integrating a whole new element into the drama, the cameras track the main characters, Frederic Henry, American ambulance driver for the Italians, and nurse Catherine Barkley, as their strange romance progresses, projecting their images (lips out of synch) onto hospital screens or walls.

As camera operators morph back and forth into characters, stagehands and dressers, five of the six actors, in rapid alternation, also take turns as narrators, ensuring Hemingway, author and journalist remains ever present, even eclipsing the actors. His prose comes fast and furious as first one speaker, then another, reads out the pithy words, interspersing description and narration with enacted drama and the stilted, sparse speech that typifies Hemingway.

Contributing further to the constant flow and movement, the text itself pours out across the set, pages turning, letters falling sometimes in a chaos of flack, exploding like the rubble that pours onto the stage as the play begins to throw us straight into the brutality and chaos of war that pervade the first act.

Amidst smoke, explosions, and music that travels from opera and bursts of disconcerting notes to piano melodies (some deserving more attention); amidst moving maps, moving text pages and moving video images (including plenty of essential Hemingway rain and some snow); amidst hospital beds that serve also as hotel beds, jeeps, trucks, war zones and a (wonderfully effective) travelling train, the words come head-spinningly fast and furious, spoken frequently (and well) in Italian and French, whose translations flash overhead. In fact, at times, there’s so much going on, it’s rather like a web page full of constantly changing, pop-up windows, each vying for attention, making it tricky to take everything in properly, and, while there’s something captivating in Jude Monk McGowan’s detached yet involved Henry and in Matt Prendergast’s loud Rinaldi, in all the rush, the development of characters and relationships seems, on the whole, less well honed.

Yet it’s amazing how much of value and impact has been packed into this piece, and in Act Two, once away from the war, a slower pace brings more emotional involvement for both actors and audience, leading to a powerful and poignant ending.

This is a praiseworthy production that can yet be tweaked to greater excellence.

The world premiere took place in Lancaster on Oct 10th. The show now travels to Ipswich, Manchester, Salford, Birmingham and Brighton, then to four venues in Italy.