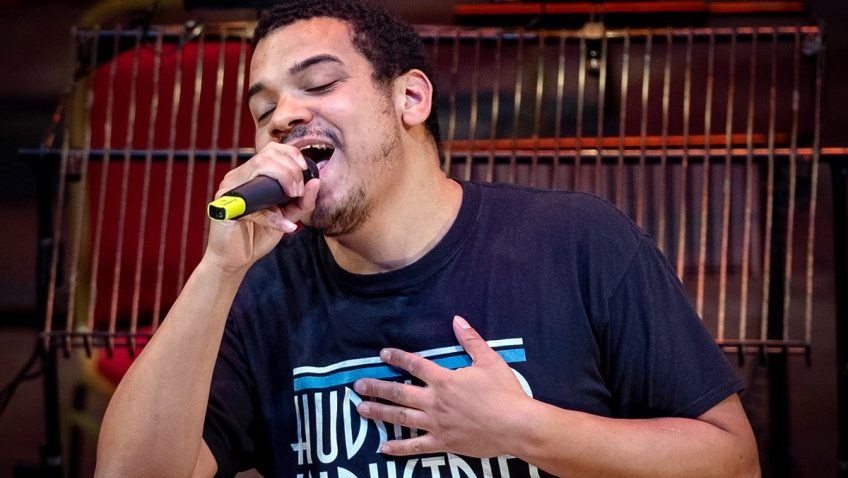 Riveting stage presence and abundant natural talent belong to fine-voiced singer, rapper and nifty boom-bada-boom-bada-boom-boom-beatboxer Testament, making for fascinating entertainment in Orpheus in The Record Shop, an hour-long mini-musical of a play, penned by Testament himself. He acts mightily, too, in this well rounded, well crafted, thoughtful, meaningful piece that sparkles with original, storytelling hip-hop, soul and funk numbers of memorable melody – enriched, as time goes by, by diverse orchestral and choral input.

Though the play revolves largely around Testament’s vibrant storytelling monologue and music, other characters spring boldly to life onstage, too, via engaging anecdote, narrative, mimicry and humour, all addressed directly to each of us as we build up a picture of Orpheus’ life and world, past, present and future. Running an eclectic but quiet record shop in Leeds, young Orpheus is struggling to keep afloat both financially and emotionally, for he’s grieving deeply, too, for the loss of his partner Justine (from Leamington Spa) who’s left him and gone to a better place (Venice). Like the Greek Orpheus who followed his dead wife Eurydice to the depths of the Underworld in the hopes of bringing her back, this Orpheus is also struggling to learn one big lesson: never look back. This, indeed, is the particular message of one mystical, soothsaying customer, a 50-year-old woman with a tartan shopper.

Yet Orpheus is looking back all the time, reminiscing about fond times, angry and resentful of his painful past, struggling with the present and fearful of the future. The stage sets him at the start in a darkened space, all alone in his shop, “doing it on my own, doing it on my Jack Jones.” In vivid dialogue and narrative song we meet those who people his life: customers, father, lost love Justine, complaining Ghanian security man Kojo, big man DJ Vulture, and Sahid the taxi driver who sings that “nobody wants to talk no more”, and we also gain understanding of why the three girls at the chip shop, three right furies, are so pissed off. For one scene only another actor takes the role of Orpheus’ disliked, angry, difficult father to tell a fuller story from his side, heralding the song, What Does It Take to Make Hades Cry Iron Tears?

Just as the world of people and relationships is fleshed out with interest and unexpected variety, so is the music. As the story progresses, mood and atmosphere are reflected first in Testament’s song and beat-box percussion alone; then a harp joins in, played sometimes, intriguingly, as a guitar. Later, a creepy horn, a trombone, bassoon, violins, xylophone, a perky clarinet and singing voices arrive, as Orpheus moves from isolation towards the welcome warmth of community. Enriching mood and impact, the textured score requires instruments be played in ways both conventional and less conventional by formidable musicians of the Opera North Orchestra, dressed casually and seated about a set, subtly and atmospherically lit to incorporate varying levels of darkness, shadow and lots of blue. Testament has penned his own striking songs for this work, but Gluck gets a look in right at the end as we finish with one of Kathleen Ferrier’s greatest hits, the classic 1762 aria, What Is life Without You?

As if all that weren’t wow factor enough, Testament, dressed in dark, ancient-Greece-flavoured T-shirt and unzipped hooded top, brings electronic loop and knob twiddling a-plenty to his songs, and added sound effects: mobile phone, pattering keyboard and the delightfully convincing hiss and crack of needle on vinyl. Throughout, a sincere delivery of wit and emotion, of silent pauses, of gentle, silent tears, holds winning appeal as we travel via the restorative power of music from dejected isolation to full-blown optimistic, proactive sociability, taking in Ed Sheeran (from Halifax, not Leeds) Scooby-Doo, Columbo, the Antiques Roadshow, Oedipus and HS2 along the fascinating way. All bears enjoyable testament to the combined talents of Testament, the musicians of Northern Opera and all those involved in the production.

The play premiered to a distanced audience in Leeds in Oct 2020. It has been reworked for this film version, now available on BBC Sounds for 11 months as part of the BBC’s Lights Up project, a scheme that supports hard-hit artists and organisations during Lockdown.