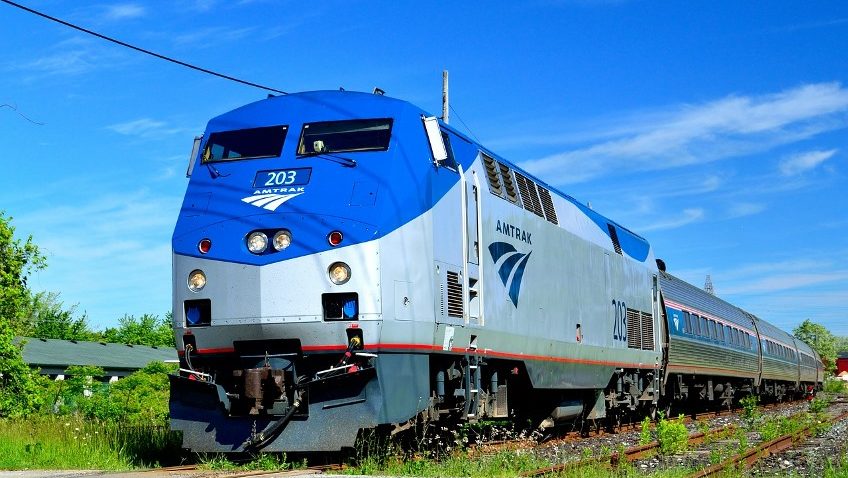 When my travelling companion Peter and I climbed aboard Amtrak’s Texas Eagle how could we have known that we’d soon be finding ourselves right in the middle of a famous Johnny Cash song.

We’d flown out to Chicago to ride this iconic Amtrak railroad all the way to Los Angeles in sunny California with a short stopover in historic San Antonio, Texas, to visit the legendary Alamo fort,

Our 2,250- mile journey began in “the windy city’s” marble adorned and so aptly named Grand Central Station late on an April afternoon.

Soon we were ensconced in our compartment complete with comfortable seats, pull down bunks and a small shower and toilet and out came a pack of well-worn cards because we planned to play a highly competitive Rummy game as we watched America go by.

Illinois unrolled under leaden skies with vast wheat fields and little townships flashing by but there was a promising golden sunset as we entered the slightly swaying dining car and found ourselves listening to a single mum’s tale of woe.

Our dining companion was off to look after her invalid father while her mother went in for a heart “op”. This was to be the first of many dining car tales we were to hear along the way and would be giving us a fascinating insight into ordinary American life.

Perhaps most memorable was the lunchtime we spent with two Born again Christian ladies who bowed their heads and said Grace before telling us they’d divorced their husbands and were off to an evangelical convention.

We sped on through St Louis and Missouri on that first night and awoke to another dawn in Arkansaw with lakes, woodlands and small towns all flashing by en-route for Little Rock.

It was here in the fall of 1957 that Governor Orval Faubus ordered the National Guard to prevent African American students enrolling at the all white Central High School.

Siren wailing, our Texas Eagle crossed the line at Texakama to enter Texas, the Lone Star State, and it was while enjoying lunch in our “fancy dining car” that the famous Johnny Cash song Folsom Prison came to mind.

For now, we suddenly found ourselves looking out over gleaming strands of cruel barbed wire into a large guarded compound with groups of inmates standing around.

So, was this Folsom Prison? we wondered.

In the song, Cash’s lifer hears the train’s lonesome whistle and wishes he could move the line away from this place of his life-long incarceration.

Unfortunately for this travel piece, this place of detention was not Folsom Prison, which we discovered, was in California, our destination state.

However, in the song, the train does goes travelling “on down to San Antone” and so was our Texas Eagle, but not before we’d rumbled slowly through the towering skyscrapers of Dallas.

For most older readers, the very name Dallas can only be synonymous with the shock assassination of President John F Kennedy as his motorcade drove through the city back in November 1963.

We left the train in San Antonio and enjoyed a memorable afternoon visiting The Alamo, an 18th-century Spanish mission, now preserved as a museum, which marks the infamous 1836 battle for Texan independence from Mexico.

After staying overnight, we spent the following day wandering along the San Antonio River walk, now a landmark promenade lined with cafes and shops, and ascending The Tower of the Americas for a bird’s eye view over the city before catching the next train bound for Los Angeles.

It was dark when we climbed on-board our second Eagle and awoke to a far more barren landscape punctuated by a series of green river valleys until even those dried up and we journeyed ever onward over barren scrubland while vultures circled in a pale blue sky.

Later in the day, a range of distant peaks, shrouded in clouds, hove into sight and quite suddenly the weather changed and rain splattering on the domed observation car windows obscured the view.

Our Eagle made a brief halt in the small town of Alpine, Texas, which is surrounded by distant peaks and is the gateway to a national park and here we had to move our watches forward an hour to Mountain Time.

Now rolling hills and open prairie grasslands were stretching ahead as far as the eye could see and we’d entered prime cattle rearing country of the old West bound for El Paso.

This historic city, established in pioneering days alongside the banks of the Rio Grande, is close to the Mexican border and the Franklin Mountains State Park, home to cacti and desert wildlife including coyotes and golden eagles.

From El Paso we journeyed steadily on into New Mexico, waiting patiently in the occasional siding for quarter mile long freight trains to go rolling by, and then forward into Arizona, now time for dinner.

While breakfasting in our dining car the following morning, our Eagle passed stockyards full of shuffling cattle.

Now we were crossing classic Arizona desert like landscape punctuated by sandstone peaks en-route for old Fort Yuma where a white man killed an Apache Chief and started a war.

The Apaches decided to sneak into the fort dressed as federal soldiers so massacred a supply column to steal the uniforms but one man managed to escape and made in back to the fort to raise the alarm.

Now back on Pacific Time, we moved on through grassy foothills and fruit filled orchards to come at last to Los Angeles Union Station with its impressive halls of marble and glass.

We’d played around two hundred games of cards on our way across America and had ended up almost even!

The Texas Eagle no longer travels direct from Chicago to Los Angeles but passengers can still cross the country to LA on the South West Chief calling en-route at Santa Fe, Williams, Grand Canyon National Park and Flagstaff.