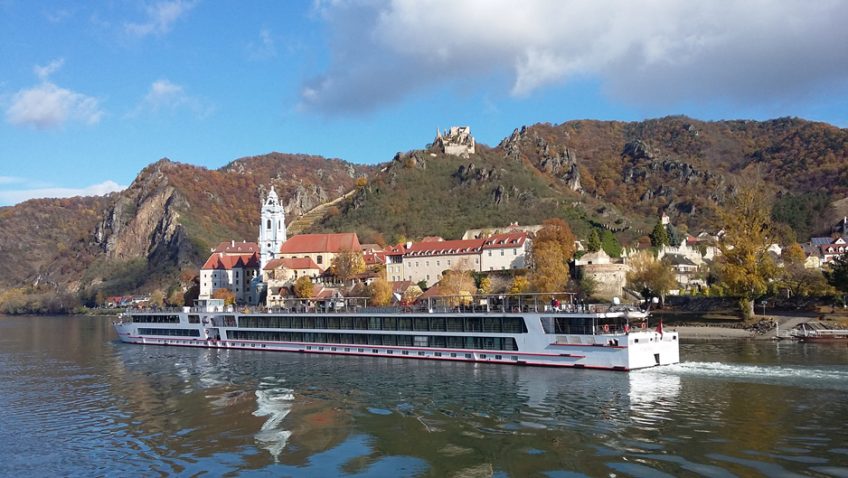 It was a glorious Sunday in autumn as we sped along the autobhan from Munich towards Nuremburg with the late afternoon sun turning thousands of beech trees to gold.

“We Germans call autumn ‘Old Granny’s Summer,” said our driver who was ferrying us from the airport to join the long ship Viking Jarl for an eight day, five hundred mile cruise through Germany into Austria and on to Budapest in Hungry.

He did not know why but we were to find out the answer a little later.

At dinner onboard my wife Jenny and I sat next to a retired American couple from Philadelphia and it was fascinating to be led down the paths their lives had followed on the other side of the Atlantic.

Listening to such stories from fellow travellers over an excellent dinner  was another of the benefits of taking a European river cruise.

Sitting in a plastic docking station in our stateroom and winking green eyes at us were two TV style remotes which turned out to be an ingenious aid.

For on leaving the ship the following morning for a coach and walking tour of Nuremburg, we attached ear pieces, popped the remotes into our pockets and were  instantly linked to our ‘miked-up’ guide. Having passed the marching grounds where Hitler’s demonic oratory roused a nation, and then ironically, the courthouse where Nazi leaders were put on trial, we left the bus, to tour Nuremburg’s castle and cobbled old quarter and were treated to a magnificent view over the city.

That afternoon we lunched on deck as the Viking Jarl continued her voyage along the tree lined Main-Danube Canal linking the mighty rivers Rhine and Danube en route for the small Medieval city of Regensburg.

It was the great bell of St Peters Cathedral ringing out through the misty morning  that welcomed us to one of Europe’s best preserved cities, the oldest on the Danube and a UNESCO World Heritage site.

The advantage of this memorable one day stopover in Regensburg was that our luxury floating hotel tied up close to the town centre and the city’s 12th Century stone bridge.

While the cathedral is considered to be the finest in Bavaria, Regensburg has many fine old patrician houses and its magnificent central square was first a Roman gathering place.

That evening  their was a special Bavarian entertainment with local musicians in national dress, traditional fare and locally brewed beer.

And as the festivities drew to a close, our ship slipped her moorings and began her overnight passage to Passau which stands at the confluence of the Danube with the rivers Inn, which flows through Innsbruck, and the Liz.

Picturesque Passau, like Regensburg, is a place of a thousand picture opportunities and it was on a walking tour around cobbled streets that our guide revealed that Old Granny’s Summer was so called because of all the fine gray spider’s webs that appear in autumn.

Must sees in Passau are the stunning Gothic Cathedral, which has the largest pipe organ in the world and the world’s largest private collection of 40,000 pieces of glass dating back to Roman times.

Now time, like the river, was flowing past and it was Thursday and we were cruising  through the autumn gold forest and vineyard covered hills of the Wachau Valley, another UNESCO World Heritage Site, with its picturesque village of Durnstein with its  hill top castle where Richard the Lionheart was held captive.

That afternoon we toured the hilltop Gottweig Abbey, a working Benedictine monastery for 900 years and sampled their wines before going back onboard for an apple strudel making demonstration.

Later we docked in Vienna where one group of passengers were whisked off into the city for a Mozart and Strauss musical evening.

It’s funny what one remembers, I thought the following morning after we’d finished a coach and walking tour around this architecturally fabulous city of the Hapsburgs with its palaces, elegant public buildings and famous Spanish Riding School.

On passing the stately City Hall with its large golden statue depicting the Goddess of Wisdom, we were told that the Viennese often said she was outside but never inside!

I was also impressed to learn that university education is free in Austria.

That evening our Ukrainian born Captain Vitaly Makarchev threw a cocktail party and farewell dinner because we would be sailing that night for Budapest, our final destination.

We tied up at breakfast time right opposite the parliament, probably the most iconic building in this lovely city, and disembarked for a fascinating four hour coach and walking tour. These included tours led by excellent guides, were among the highlight of the holiday and allowed guests to garnish an all round view of the history and culture of the places we visited and Budapest was no exception.

Poor old Hungry, I thought as we learned of successive invasions by the Mongols and Turks, its incorporation into the Austro Hungarian Empire and then the Soviet Union who came as liberators at the end of World War Two but  then forgot to go home until after the tearing down of the Berlin Wall.

Yet despite all this the city has recovered to become probably the most architecturally spectacular on the Danube.

Life onboard fell into an easy pattern of breakfast, an included tour, lunch, optional excursions, cocktail hour, a briefing on the following days activities, dinner and live music and other entertainments in the lounge.

The cuisine was imaginative and plentiful, the hotel team could not have been more helpful  and wines and beers were included with meals.

Besides Roger and Candy, our Philadelphia shipmates of the first evening, we also got to know Mary, a mum of six, and her travel agent friend Julie who had left their husbands at home.

Mary invited us to a party but it was at her home Tucson, Arizona, which sadly I think might just be a trip to far.