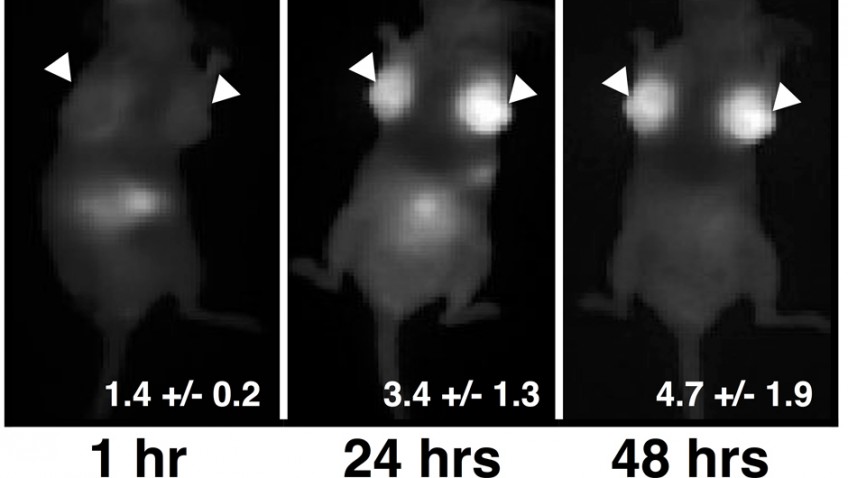 The new pill that ‘lights up’ breast cancer tumours

A new pill that ‘lights up’ tumours could improve the diagnosis of breast cancer.

An issue with current methods is that they often identify lumps but can’t conclusively pinpoint which ones are cancerous.

To help resolve this uncertainty, researchers have developed a pill that could improve imaging techniques so that only cancerous tumours light up.

Doctor Greg Thurber, of the University of Michigan in the US, said: “There’s a lot of controversy right now about when patients should start screening for breast cancer.

“Screening can potentially catch the disease early in some patients, but false positives can lead to unnecessary, aggressive treatments in patients who don’t need them.

“We don’t know how to select the right patients to treat. Our work could help change that.”

Breast cancer is the second most common cancer in women. Mammograms, the current standard for screening, are X-rays of breast tissue.

They give doctors information about a lump’s location and size, but they can’t distinguish between cancerous and benign growths.

To find out more, doctors have to take a biopsy, which can involve needles or surgery. Biopsies, however, aren’t 100 per cent conclusive.

When suspicious lumps are found, doctors and patients will often opt for treatment ranging from surgery to radiation or chemotherapy, which can take months and cause serious side effects.

To better weed out patients who don’t really need treatment, Dr Thurber’s team developed an oral pill containing an imaging agent that selectively binds to cancer cells or blood vessels that are unique to tumours.

Once attached to its target, the dye fluoresces under near-infrared light.

Although at this wavelength, fluorescent tumours can only be detected one to two centimetres deep, Dr Thurber says given the elasticity of breast tissue, pairing his technique with ultrasound in the same instrument should be able to detect most cancers.

Testing in mice showed that with the proper formulation, 50 to 60 per cent of the agent gets absorbed into the bloodstream. It also binds specifically to cancer cells with little background noise in the image. That is, the fluorescent signal from the tumour was far stronger than the signal from the surrounding tissue.

If his team succeeds in formulating the pill for human patients, Dr Thurber says the high image contrast should bode well for women with dense breast tissue whose mammograms are difficult to read.

Dr Thurber is also designing the agent to specifically seek out aggressive tumours, an approach that could distinguish them from slow-growing cancers such as ductal carcinoma in situ, a non-invasive breast cancer.

Now Dr Thurber is coupling the probe with molecules to make it easier for human patients to absorb.

But he said predicting when his agent might go into human clinical trials is difficult. However, the dye is already used in Europe for other clinical applications.

The researchers reported their findings at the National Meeting and Exposition of the American Chemical Society (ACS).