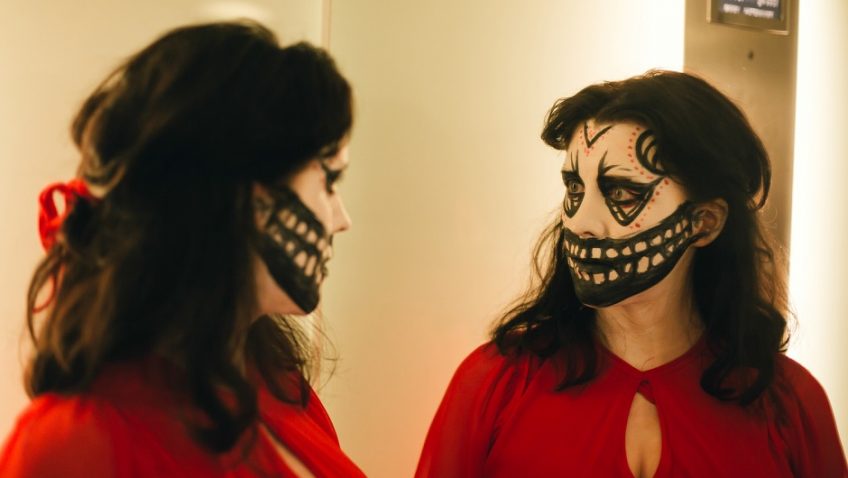 Actresses who find themselves pregnant normally take a hiatus, recognising that they are all but unemployable.  It’s not just the difficulty of obtaining production insurance or maintaining continuity. It’s more that, as many mothers appreciate, babies take over your life – even before they are born.  When comedienne Alice Lowe (Black Mountain Poets, Sightseers) had the opportunity to write, direct and star in her first feature film she was pregnant and decided to explore this concept quite literally.

After Lowe’s successful foray into scriptwriting with Ben Wheatley’s 2012 black comedy, Sightseers, Lowe simply wrote a pregnant first-time mother into the script of her directorial debut. This being Alice Lowe, however, there had to be a few adjustments for her character would not be just any pregnant mother.  First, she gave the unborn baby girl a supporting role as her mother’s handler.  Second, she killed off the husband/father in a climbing accident, leaving mother and baby feeling cheated and vengeful.  For there’s another common assumption on which Lowe casts doubt: notably, that babies are inherently sweet. Lowe’s baby is, on the contrary, bitter.  If this sounds like the recipe for something warped, perverted and potentially very funny, it is.

The film is bookended by two scenes on an exposed cliff overlooking a rough sea, but, at the beginning, we are not sure why we are looking at this cliff.  Ruth (Lowe) learns of her partner’s death in a climbing accident the day that she learns she is pregnant with her first child.  Surprisingly, the unborn child reacts to the news that it will enter the world without a daddy.  Forget about kicking, this baby expresses her anger vocally.  Ruth finds herself driven by her daughter to track down those responsible.  She confides in her midwife (Jo Hartley), ‘It like I’m some kind of old, battered car and she’s the driver.’  There are some signs that Ruth was a normal, empathetic woman, but her pregnancy, not to mention the inquest into her husband’s death, have changed her.   The main evidence of this change is her bad conscience about a kind roommate (Mike Wozniak) who was in the wrong place at the wrong time.

To say any more would be a spoiler for those who haven’t figured out the method in Ruth’s madness.  Her method is easy to see, in retrospect, but many viewers will  realise what is going on from the generous clues that Lowe drops like breadcrumbs along the way.  One character, however, DJ Dan (Tom Davis) puts a spanner in the works from the get-go as he doesn’t look ‘the type’. The heavy set, bearded DJ who hangs out in dark clubs and lives with his elderly mother is an anomaly (to say in what way would be a spoiler).  Ruth has no qualms about doing away with this sexist slob in a fitting manner before putting his neglected mother to bed with a kiss.

Cleverly, Lowe does not challenge society’s views that pregnant women are vulnerable, life giving and deserve our help and sympathy.  Ruth is aware of this norm and uses it to facilitate her agenda.  The scenes with Ruth’s increasingly concerned, but also, alarmed (Ruth compares the baby to ‘a hostile takeover’), midwife are a case in point.  When the midwife dares to threaten Ruth with social services, Ruth’s expression and body language are enough to put that thought to rest.

Not everyone is willing to extend a hand to a pregnant woman, however, and Lowe also satirises the attitude of most businesses to pregnant employees.  One lady on her list is Ella (the wonderful Kate Dickie, Red Road) who is the personnel manager in a large company.  ‘It’s not that you’re pregnant,’ she tries to reassure an inquiring Ruth.  ‘But you’d be taking maternity leave while you’re unpacking your stapler…It’s a corporate world; we’ve had to make a lot of cuts.’  After Ruth utters a particularly nasty pun on the word ‘cut’, the baby pipes up, ‘Don’t get too cocky.’

Like a mixture of Kind Hearts and Coronets, Rosemary’s Baby and Kill Bill, it’s not profound, but it has enough substance to it to keep you watching, and, if not laughing, chuckling.   The big difference is that it’s directed by a pregnant woman and on a very low budget, with many of the supporting cast being fellow comedians and friends of the director.  For this reason Lowe tells us in the production notes, she decided to shoot the grisly scenes first so the actors could enjoy the interaction and dialogue leading up to them.  Now, what male director would be so considerate.