Home / LIFESTYLE / Not so micro-pig 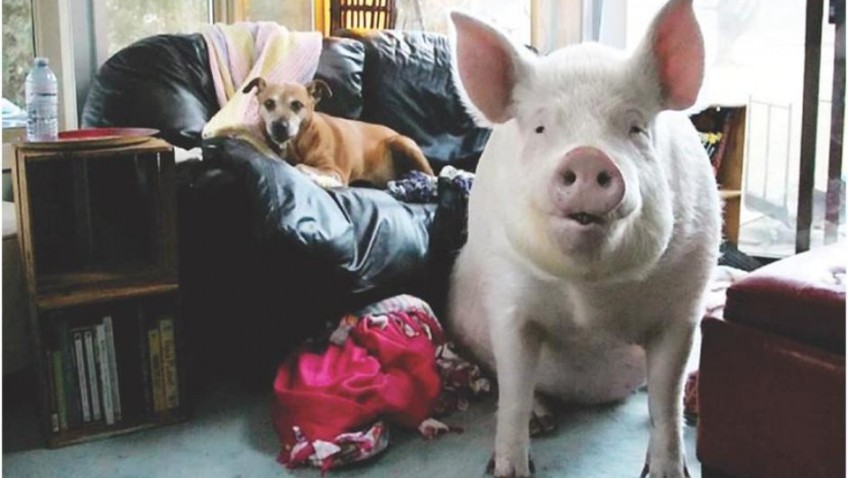 A couple who bought a micro-pig were stunned when their pint-sized family pet turned into a 670 pound giant.

Steve Jenkins and Derek Walter adopted Esther thinking she would only grow to around 70 pounds.

But they were tricked and Esther, thought to be a commercial pig, has not stopped growing and is now heavier than a fully-grown female polar bear.

The two-year-old animal – who is toilet trained – lives in their house along with two dogs and a cat and eats more than £30 worth of vegan food a week.

She is now an internet sensation with hundreds of thousands of people following her ‘Esther the Wonder Pig’ Facebook page.

Steve, who works in the property industry, said: “We lived in denial for a long-time, friends would come over and say ‘she’s getting bigger’ and Derek and I would say ‘no she’s not’.

“But soon she was standing to steal things off the kitchen counters, the couch became smaller, and of course there was the weight gain.

“We just adapted and loved her more.  What else could we do? It wasn’t her fault and we would never give up a pet.

“At night, when we lived in Georgetown she had a mattress in the living room, but since we moved to the farm she has decided she needs to be close to us and now sleeps beside our bed with her mattress on the floor.

“She still on occasion climbs up onto our bed for a nap during the day.”

Esther is now almost ten times her expected size, and is fed a diet of rolled oats, barley, and corn.

She also enjoys fresh fruit and vegetables like over ripe bananas and veggie peels.

The cute pink animal spends her days rooting in the gardens, eating, sleeping and cuddling up to her other furry friends.

In just one year, her Facebook page has picked up more than 258,000 followers.

Steve added: “It is still surreal and absolutely mind-boggling.We started Esther’s page just as a way for immediate friends and family to stay in touch with us and Esther’s antics.

“But one of those friends shared Esther’s page on an animal-related website and the next thing we knew Esther’s page had 10,000 likes and it never stopped.

“Derek and I are Esther’s voice and some days it is really challenging to come up with new quips and I will sit there staring at a picture until something comes to me.

“Other days it’s as if I can read Esther’s thoughts and I swear she can convey them with her eyes and her smile.

“Even now people are astonished by her size and her awareness. It is as if she knows she is famous and that is her role, that she is changing the world’s view of her kind and their incredible abilities to think, feel and be loved.”