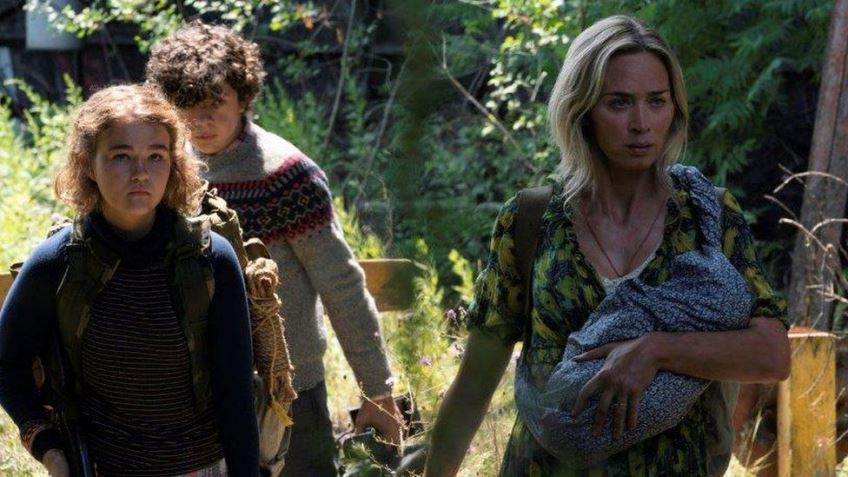 A Quiet Place II is a sequel that expects you to have seen the 2018 original – and a lot of people did. On a budget of some $20 million A Quiet Place, directed by actor (It’s Complicated) -turned-writer-director John Krasinski (and co-written by Krasinski with Bryan Woods Scott Beck) made over $300 million at the box office. And that was pre-pandemic. For A Quiet Place I and II are plague movies and for the first 473 days the Abbott family is locked down in their upstate New York farm with death all around – not if you breathe in, but if you sneeze, or cough – or speak.

The original film was a four-hander, with the Abbotts, a loving, small-town family of five (with one on the way), is reduced by two when their home is under siege by an infestation of dark, slimy, and gigantic spider-like reptiles. The title takes on a new meaning because the creatures cannot see well but have an acute sense of hearing.

The original film ended on siege day 473 after Evelyn Abbott (Krasinski’s real-life wife) has given birth – with a bit in her mouth to avoid screaming – to a baby whose crying poses a serious threat. She has also stepped on a nail among other hair-raising misadventures. You might miss Blunt in Part II, for here Regan (Millicent Simmonds), who is deaf in real life and in the film, takes centre stage. The Abbotts have the advantage of knowing sign language – and of having the intrepid Regan.

While Krasinski takes sole writing credit this time, Part II gives us more of the same winning formula by expanding the action and the cast numbers, but without giving us a stake in their adventures which you watch a bit like Jumanji.

For those who haven’t seen the original and for those who have, Krasinski stages a quick prequel, captioned Day 1. Farmer Lee Abbott (Krasinski), resurrected from the original where he is a fatality, is buying snacks for a little league baseball game which the family is watching nearby. Adolescent son Marcus (Noah Jupe) is up at the bat but looking like he would rather be anywhere else. Evelyn is watching with encouragement, surrounded by toddler Beau (Dean Woodward) and Regan.

Just as Marcus is struck out by the pitcher, he spots a burst of fire and smoke in the sky, and the crowd run for cover. But it is too late: the town is under attack by the monsters and, after witnessing the first fatality – a black police officer (Okieriete Onaodowan) who dies saving the white crowd – we cut to day 474.

Though Beau is a casualty (and Regan feels the guilt), and Lee has sacrificed himself to distract a monster from his trapped children, there is Evelyn’s new baby. She is alone with the three kids when their barn catches fire. For some reason, when she goes to retrieve items from the barn, she finds an oxygen tank that plays a major part in the film. Throughout, it is the means by which the baby can be kept quiet in a box. Later, when Marcus and the baby are trapped by a monster in a vault (more on that later), Marcus does buddy breathing with the infant as in a scuba dive.

In A Quiet Place, gender role reversals were developing and are fully exploited in Part II. Marcus is the non-sporty, timid, domestic type, while Regan is an adventurer. She takes after her father in being technically minded and practical, too, continuing his research into using her cochlear implants to disable the monsters. Just as the implants electronically stimulate the auditory nerve to hear, so, when amplified by a microphone and radio, they can be the monsters’ Achilles heel. It seems the armour-like skin near the head opens at the highly pitched sounds, leaving them disorientated – and vulnerable to bullets. Regan also climbs on roofs to spot signs of life from distant fires and uses a map and compass to detect a colony of survivors who have a transmitter, playing the song, Beyond the Sea.

The family heads off and find another survivor who happens to be a friend of Lee, Emmett (Cillian Murphy). He is cagey about his wife’s death and wary of showing hospitality to strangers whose carelessness might jeopardise his life. Emmet survives in an abandoned factory and uses a disused vault as a safe room.

Knowing her mother will stop her, Regan decides to sneak off to find the people with the radio, located, according to her calculation, just offshore, three days’ walk away. Regan’s altruism and courage is one of several clever echoes of Part I that link the two films. Just as Lee sacrificed his life for his children, so Regan risks her life to find a solution. And just as Evelyn steps on a nail in the original, Marcus has a nasty accident that wounds his foot – and causes him to shout out in pain – on the way to Emmet’s. If you have seen the original, you can play spot the echoes. If not, but have seen zombie movies, you can spot the outside influences.

There is also an unfortunate echo within Part II when a hospitable survivor and father, Djimon Hounsou (best known for Amistad, Blood Diamond and Gladiator) dies shortly after feeding Regan and Emmet and showing them something that will save their lives. This is an echo of the black police officer killed on Day 1.

Krasinski also needs a mechanism to up the ante while using Cillian Murphy’s talent. When Evelyn persuades Emmet to find Regan and bring her back, he’s got one. The action is conveniently split in two. Krasinski can heighten the tension by cutting between the Regan and Emmet adventure and the home-based characters and dangers, until the two strands meet in a climactic scene. Though some of the parallel action cutting feels contrived, it doubles the scares and suspense.

The splitting of the action is also convenient in terms of Krasinski’s attempts at character development. Emmet, the wary hermit is forced to become a new father figure to Regan, who teaches him something about moral courage. Marcus, who was scared of everything when Lee took him fishing and for a chat under the noisy waterfall, has to conquer his fear, learn to be resourceful like his sister and to pick up a gun and use it. It is hard to know what Evelyn is experiencing although she spends much of the film making up for her children’s impulsive actions.

If and when the action and the scares get repetitive, you can spot the holes in the story, chief among them, why the creatures kill humans but do not eat them and why Regan is the only person in the town, state or country to have figured out the connection between her high frequencies and the monster’s vulnerability. That said, there might be a Part III in which all this and more will be revealed.