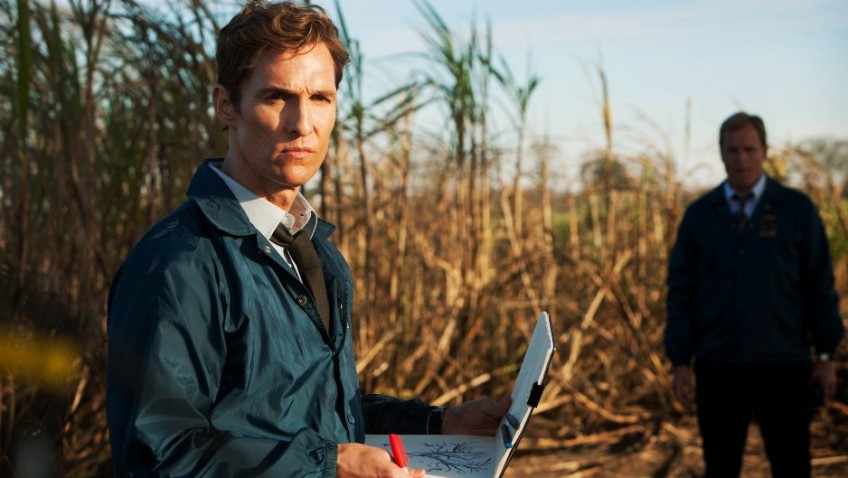 TRUE DETECTIVE (Warner Bros) Two deeply flawed Louisiana cops, mentally sickened by all the horrific violence, degradation and sheer evil they see every day, are seeking a satanic serial killer of children. Nic Pizzolatto’s bleak, brooding and pretentious script (directed by Cary Joji Fukunaga) is spread over a 17-year-period.  This television series may have been over-rated but the performances of Woody Harrelson and especially Matthew McConaughey keep you watching. It is the interplay between them which is what the series is all about and not the solution of the crime. The denouement is a big disappointment; an absolute cop-out.  We all know who really did it, don’t we?

THE ROCKET (Eureka).  Australian director Kim Mordaunt’s second film, like his first, is also set in Laos, the most bombed country in the world. He tells a sad story of a family forced to leave their home because the valley is going to be flooded. They are not given proper compensation. The hero is a brave and resourceful 10-year-old boy (played a former street kid, Sittiphon Disamoe) who because he is a twin (his brother died in childbirth) is cursed. The superstitious people of the northern mountains believe twins bring bad luck. The film has an up-beat ending.

CAT AND MOUSE (Network). Kirk Douglas is cast as a disturbed ex-teacher who wants to kill his ex-wife (Jean Seberg) when he learns she has remarried and won’t allow him access to their child.  Daniel Petrie’s slow-moving film was made for TV in 1974 and got such a limited a cinema release that few people will have heard of it. It’s fine if you accept it for what it is, a TV thriller, and if you are prepared to believe that a sensible granny (Bessie Love) would let a strange man with broken spectacles and a bleeding hand into her flat.