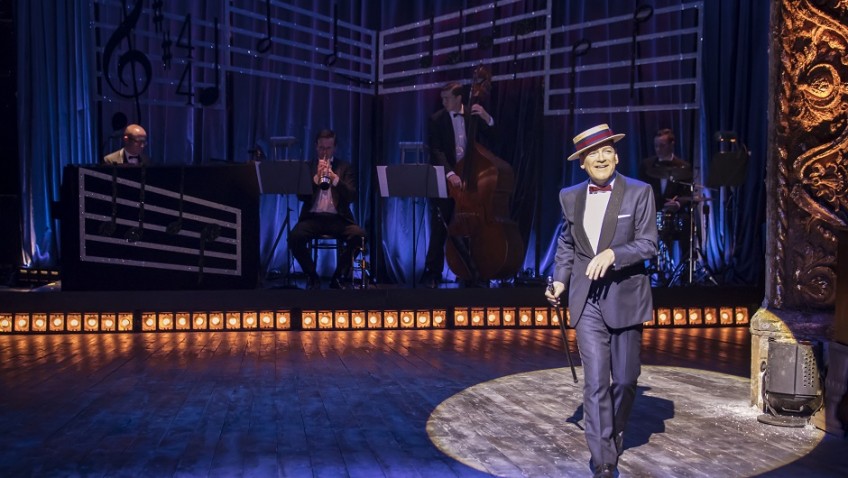 What made John Osborne’s play so memorable at its premiere in 1959 was the unexpected casting of Laurence Olivier as Archie Rice. The foremost classical actor was not only cast as a camp, sleazy fifth-rate music hall comedian but he was also acting at the Royal Court, home to all the angry young men.

Archie Rice is one of the great 20th century roles and it was a major turning point in Olivier’s career, bringing him into the modern mainstream. And 50 years on Olivier’s performance remains the definitive performance.

Osborne uses the dying music hall is a metaphor for Britain on its last Imperial legs: “Don’t clap too hard, lady – it’s an old building.”

The Entertainer is set at the time of the Suez debacle and the Trafalgar Square anti-war rally, which inevitably hasn’t the resonance now it had then.

Archie is appearing in one of those twice nightly tacky nude revues. He fills in the gaps while they set up the next tableau vivant. Some people thought the character was based on Max Miller. It wasn’t. Archie Rice isn’t a great music hall artist. Max Miller was

Archie is all washed-up and dead behind the eyes. He camps about on stage to get a titter from his audience. He camps around off-stage to hide his self-loathing.

Kenneth Branagh, not wanting to give an imitation Laurence Olivier, has turned Archie Rice into a hoofer; and into a hoofer who is really too good.

The Entertainer has two distinct venues: the theatre where Archie performs and the lodging house where he and his family are staying. Director Rob Ashford and his designer Christopher Oram make no distinction and merge the two.

So Archie continues his routines when he is at home and his family freeze whilst he talks and sings. The music hall act would have far more period impact if it were acted in front of a genuine music hall drop-curtain.

It would also be better if the dancers weren’t so good looking and they didn’t have to be stage-managers and move the furniture on and off.

Sophie McShera is Archie’s daughter and her high-pitched one-note voice is hard on the ears and her hectoring all the more tiresome. Her brother (Jonah Hauer-King), who is brief and to the point, makes a more effective political statement.

Archie has a great exit line: “You’ve been a great audience. Let me know where you’re working and I’ll come and see you.”