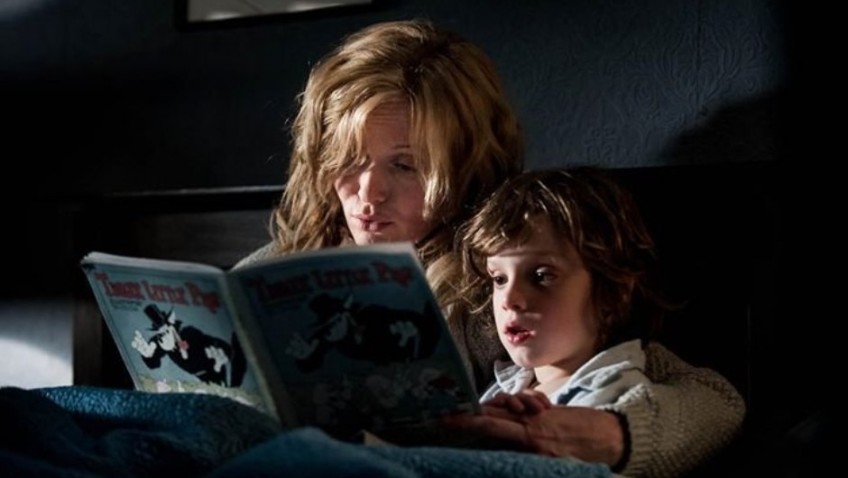 ‘Mister Babadook’ sounds like a funny character in a children’s story, but it’s uncanny how a word or name can change on a dime depending on the context and what we read into it.

While the kids get on with their trick-or-treating, unhampered adults can celebrate Halloween with The Babadook, an unsettled, impressively-acted and directed, if occasionally clichéd, psychological horror movie.

Amelia and her six-year-old son Samuel (Noah Wiseman) both have trouble sleeping.  Sam has a recurrent nightmare about a monster and rushes to Amelia’s room where she is having nightmares of her own.  She reads him a bed-time story to get him to sleep.

The routine is affecting Amelia who finds it hard to stay awake in her job as a carer in an old people’s home.  She is as patient and kind to the elderly as she is with her hyperactive son.

Noah asks his mother, ‘why don’t people like me?’ while behaving strangely and even violently in their presence. But when the school board recommends a monitor to keep tabs on ‘the boy,’ as he is called to her annoyance, Amelia is indignant and pulls him out of school.

One night, having run out of bedtime stories, Samuel hands his mother a pop-up picture book entitled Mister Babadook in which the eponymous monster pops-up in a house.  Instead of a narrative or plot, the text contains menacing threats, inappropriate in a children’s book.

Amelia fixates on the book before hiding it away.  In Sam’s overactive imagination the Babadook is real and he tells his mother he can see it.   ‘It’s just a book’, Amelia reassures him. ‘It won’t hurt you.’  Sam is convinced it will and vows to protect her.

When a child taunts Samuel about being fatherless or when a well-meaning adult acknowledges the fact, Samuel quickly corrects them. He blurts out that his father died in a car crash on his way to the hospital to have Samuel delivered. In this way we learn that Samuel survives with the guilt that he was the cause of his father’s death and his distraught, lonely mother might subconsciously feel some resentment.

They live in a roomy, if run-down and modestly furnished house with plain, gray walls and dark wooden floors. The unwelcoming house, Amelia’s depression and Samuel’s obsession with monsters have alienated friends just when they are most in need of them.

These two, vulnerable innocents deserve better, but Australian first-time feature Writer/Director Jennifer Kent puts them through the ringer. Most of their ordeal is surprisingly convincing, but the increasingly ritualistic manifestation of the monster is not without its clichés of vomiting, creeping vermin, bloody daggers, dead pets and a maniac running around the house.

What is refreshing about The Babadook is its depiction of Amelia’s – and Sam’s – mental state.  Amelia’s transformation seems psychologically consistent and Kent allows it to develop gradually.  The mother who was afraid of her son frightens him now as she struggles to maintain her maternal love in the face of her loss.

Kent progresses the action gradually but without letting up on the tension, the knocks on the door, the shadows, the images, and the book that even a barbeque cannot burn away.  Little by little, contact with the outside world diminishes, leaving mother and son alone in the house for the horror to unfold.

What distinguishes The Babadook above and beyond the stylised direction and the terrific central performance from Essie Davis is how well Kent handles the film’s metaphoric potential.  Kent never tells us how the book got into the house to begin with or why Amelia is unable to destroy it. But we do know that she is unable to destroy the trauma of her husband’s death despite the passage of six years.

Amelia ignores the interest of a supportive and good-looking colleague at work, alienates friends and neighbours and rejects help when both she and Sam could use a psychiatrist. Perhaps Mister Babadook is a metaphor for the self-destructive nature of uncontrolled grief and the demons Sam and Amelia need to face together in order to form a healthy bond.