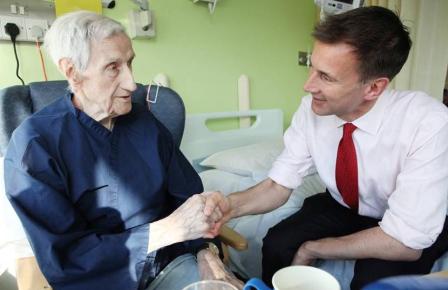 Jeremy Hunt to remain as Secretary of State for Health

Commenting on the news that Jeremy Hunt will remain in his post as Secretary of State for Health, Chris Ham, Chief Executive of The King’s Fund, said:

‘Jeremy Hunt faces some formidable challenges. He is on record as saying the NHS will need more money and he must now lead an honest debate with the public about what the health service can deliver with its budget. This means reviewing current priorities and avoiding making new commitments which cannot be funded. ‘Tackling the growing crisis in social care will be a key test of the Prime Minister’s promise of a country that works for everyone and must move much higher up his agenda. He must reignite the stalled debate on funding reform and make the case to his Cabinet colleagues for it to be a key priority for the government.

‘The Secretary of State will need to provide exceptional political leadership by supporting radical changes to NHS services and making the case for a new settlement for health and social care that provide adequate funding to meet current and future needs. He must also rebuild trust with NHS staff, especially junior doctors, to ensure that a motivated, engaged workforce delivers the best possible care for patients.’

The King’s Fund is calling on the government to review its priorities for the NHS and be honest with the public about what the health service can deliver with its budget. In a new briefing published today, the think tank suggests that key waiting time targets may need to be reviewed and the commitment to deliver seven-day services revisited, if the government’s priority is to restore financial balance in the NHS.

Analysis carried out for the briefing shows that NHS providers and commissioners recorded an aggregate deficit of £1.85 billion in 2015/16, a threefold increase on the previous year and the biggest deficit in NHS history. This is despite stringent financial controls and short-term measures implemented by the government and NHS bodies to reduce costs.

The briefing argues that the extent of overspending makes it clear that the deficit is not down to mismanagement in individual organisations but is a systemic problem, with the NHS no longer able to meet rising demand for services and maintain standards of care with the budget is has been allocated. It warns that cuts in staffing and reductions in the quality of patient care are inevitable if restoring financial balance is the government’s top priority.

Looking to the future, the briefing says that programmes to implement new models of care offer significant opportunities to improve services for patients but will not deliver major savings in the short term. It also argues that the NHS can improve productivity by improving clinical practice and reducing waste, although this cannot be achieved at the pace or scale needed to meet the target of delivering £22 billion in efficiency savings by 2020/21.

The briefing, which comes ahead of the publication of the Department of Health’s annual accounts and a new drive from national bodies to reduce deficits across the NHS, also highlights the risks to the NHS following the UK’s vote to leave the EU. It warns that the political and economic instability following the Brexit vote are likely to add to the financial pressures the NHS faces.