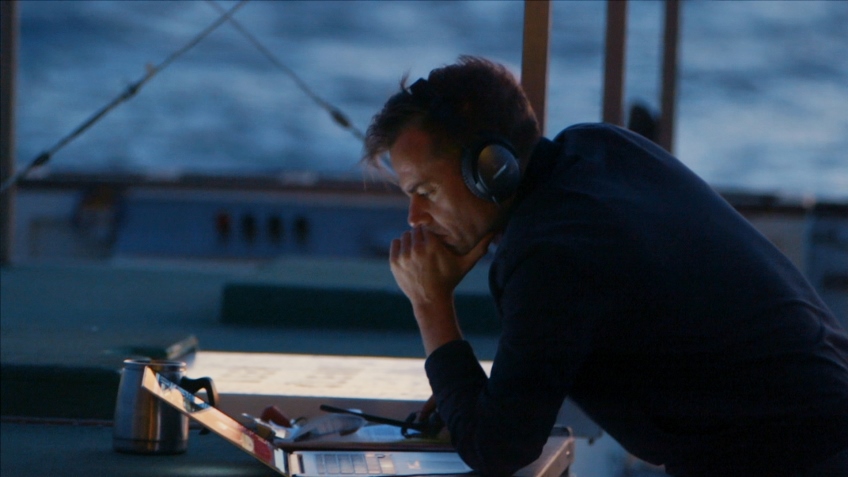 What does the top secret S.O.S.U.S. sound surveillance system, operated by the U.S. Navy 24/7 during the Cold War era to record enemy submarines, have to do with a legendary whale, swimming around somewhere in the vast Pacific Ocean? Everything, actually. Most of the noises the Navy picked up were “whale song.” But in 1989 listeners heard a strange, non-mechanical sound no one had heard before. Oceanographer Bill Watkins was asked to catalogue what they were listening to.

Director and co-writer (with Lisa Schiller) Joshua Zeman’s choppy, if fascinating documentary, The Loneliest Whale: The Search for 52 tells us about Watkins’ discovery and a lot about whales before taking us on a whale hunt. But as Watkins knew, what is concealed beneath the sea is more powerful – and elusive – than what is seen.

Dr Christopher Clark of Cornell explains that most of the knowledge we have about “whale song” is focused on the Humpback. Blue and Fin whales are infrasonic: their song is below the auditory threshold of humans, around 20 Hz. David Rothenberg, an “interspecies musician” who communicates with whales with musical instruments, describes the patterns of the Blue and Fin whales’ song, admitting, he has no idea how a whale (sound) can be so regular.

In listening to the Navy recordings (made with Sonobuoys, which Zeman’s expedition is to use) Watkins, a pioneer of marine mammal bioacoustics, discovered a biologic signature never heard before. It was the sound of a solitary whale, broadcasting at a frequency of 52Hz. It’s not that other whales could not hear the song; they could understand it. No whale was answering.

Watkins, who developed whale tags, underwater playback experiments, methods to locate marine mammal sounds underwater, and identify whales, and built the first tape recorder capable of recording marine mammals at sea, tracked the whale from 1992 until his death in 2004.

No one has heard from this whale, named 52, after the singular frequency, again as the Navy (and Watkins) stopped listening in 2004. It is assumed the whale is male as it is believed that only males “sing.” No one has ever seen this whale.

That said, John Calambokidis, Senior Research Biologist and co-founder of Cascadia Research Collective in Washington State, may have seen him. He tells Zeman that in 2004, his boat was off the coast of St Miquel, California, and the crew encountered a large group of Blue and Fin whales that had migrated for food. In amongst them was a whale that looked like a hybrid. Could it have been 52?

With Watkins’ discovery, and with his death in 2004, there was extensive media interest in 52. The story went viral and captured many imaginations, from songwriters, poets, artists, and psychologists to filmmakers like Zeman who grew up enchanted with stories of the sea. ‘We are all chasing something. We all have our white whales’ he ponders, referring to both Moby Dick and his desire to find 52.

The film delves into the issue of loneliness and whether a whale can be lonely, with some experts who have dissected whale brains, responding in the affirmative. Beneath the oceans it is dark, and whales depend on sound which travels fast underwater. Whales, like humans, are social animals and the sea is an underwater internet of sound. Then there’s 52: a disconnected whale that many humans identified with.

When Joseph George – the retired Chief U.S. Navy of Integrated Undersea Surveillance System – shows Zeman the framed 1989 “signature” (sound wave recording printout) of 52, Zeman’s eyes light up. With Watkins’ death, the possibility of finding 52 seemed to end. What if we could find him, Zeman wonders?

To finance the expedition, Zeman needs evidence that the whale is alive. If they are not killed in busy shipping lanes, by pollution, or rogue hunters, whales can live as long as 70 years.

After a visit to San Diego’s Scripps Institution of Oceanography, John Hildebrand, Professor of Bioacoustics, is onboard (literally). He had assigned an intern to look out for the whale at four points previously indicated by Watkins, with a positive result. Hildebrand and others conclude that the best spot to look would be around Point Conception where the Santa Barbara channel meets the Pacific.

After four years, the search begins, with the Bioacoustics Team on the main (accommodation) boat, listening in real time; and John Calambokidis and a helper on a small, fast boat used to approach the whales to gather skin samples, photos and to attach a tag. The pressure is on for the budget only gives them five full working days.

The search for 52 is at its best when drone shots from above give us images of the whales just below the surface of the vast ocean and of the tagging. Since there is not always a lot of action, Zeman finds other ways of entertaining us, including a potted history of man’s fascination with and destruction of the whale. By the 1950s, hunting was still rife, and the whale was heading toward extinction.

All that changed in 1966 when Dr Roger Payne, the Founder of Ocean Alliance, started listening to the song of the Humpback whale and recording it. Then he had the brilliant idea of selling an album entitled, Songs of the Humpback Whale.

The release corresponded with flower power, hippies, protests, and a new appreciation of the natural world. The album became a best seller and conservation groups like Greenpeace took action. The number of whale killings dropped dramatically, and people became interested in what the songs meant.

Back in the Santa Barbara shipping lane, the busiest in the USA, the noise of ships and oil rigs drown out the sounds of whales and confuse them, and even kill them. And the crew onboard The Truth cannot pick up signals. So, do they find 52? You will have to see the film to find out.