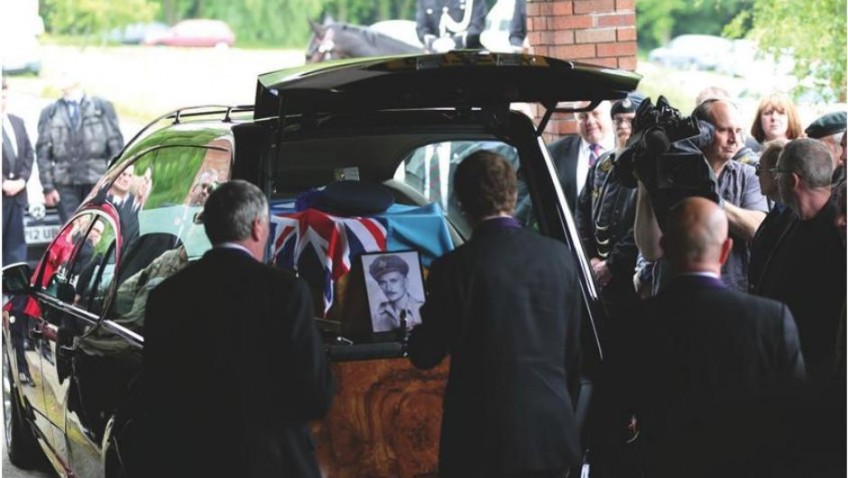 A war hero, who hit the headlines after an appeal for mourners to attend his funeral went around the globe is to have a permanent memorial.

George Thompson became a worldwide sensation following his death earlier this year after an RAF appeal was launched for members of the public to attend his funeral.

Mr Thompson fought for his country in World War Two, but passed away at 96-years-old with no family members and few surviving friends.

A modest service was transformed into a sensational send-off – resulting in hundreds of mourners from around the world attending Hutcliffe Wood Crematorium in Sheffield, South Yorks., for the ceremony.

And now the Rotherham and District Branch of the RAF Association is hoping to create a last memory for George.

They want to raise enough money to buy a burial plot and headstone for the veteran’s ashes.

Derek Padgett, branch chairman, said: “The RAF Association looks after the RAF family and this doesn’t necessarily end when someone passes away.

“The money we raise through this appeal will be used to fund a burial plot and headstone for George’s ashes.

“As so many people came to honour him at his funeral, we hope this will be a short fundraising campaign and that we will soon have enough for a fitting memorial.”

George worked at Laycock’s Engineering Works, in Sheffield, which made aircraft parts before he was eventually accepted into the RAF for pilot training aged 24.

George and his fellow course members were earmarked to fly bombers and he was sent to Canada and the USA.

While training with the American Army Air Corps, it was discovered he had incredible night vision.

He had several close shaves as a night fighter and was almost shot down over Morocco when he flew a Mosquito from the UK to what is now Bangladesh.

George and his squadron flew night interception and patrolled the skies above the Burmese jungle looking for any Japanese incursions until VJ Day in August, 1945.