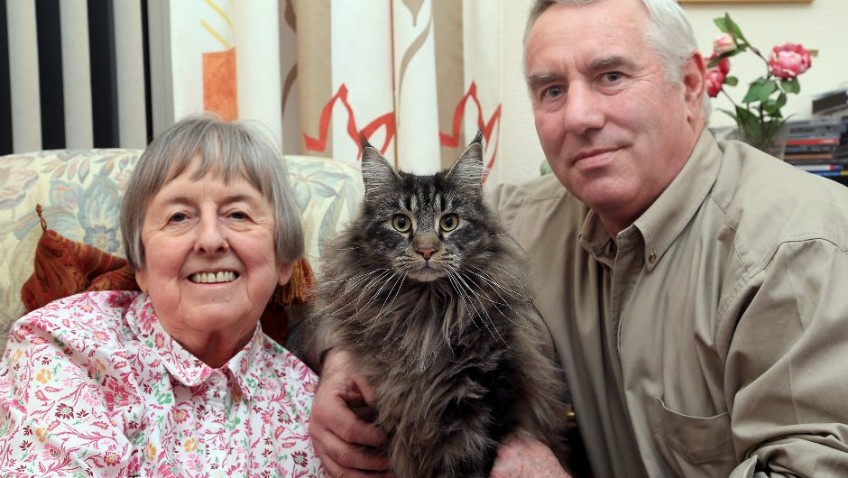 A pensioner claimed her life was saved by a heroic cat which alerted her neighbours.

Isa Gilmour, 84, fell and suffered a severe fracture after she slipped on a wet step on the way to her cellar outside her home.

The pensioner said she was unable to move and that nobody could hear her cries of agony, including her deaf husband, Tom, who was upstairs.

But a neighbour’s cat, Freya, alerted its owner, Eddie Stanley, 54, to the stricken pensioner and he rushed over to help.

Isa, of Easthouses, Midlothian, said: “It was horrific really. That cat saved my leg and maybe my life. My husband is practically stone deaf.

“Next thing I had fallen on my back and there was a bone sticking out of my ankle. I panicked, I screamed and screamed for about ten minutes. I was in shock.

“Eddie said that the cat alerted him to me. He came out and found me lying halfway in the cellar. My foot was in the opposite direction, so it was a bad break.

“It probably saved my foot. If there is no pulse in the foot then that’s that, but the ambulance crew got here in time. I’m on the mend now. I could have lost my foot at least.”

“I’ve always been very friendly with the cat but even more so now. I’m so thankful to Freya and, of course, Eddie.”

Isa spent a week in hospital and is now on the mend, thanks to her feline friend.

As soon as Eddie arrived on the scene he phoned the emergency services.

He said: “Freya was at the door looking agitated. I thought it was a cat outside so I opened the back door to look and that’s when I heard Isa screaming.

“I rushed round and found her on the floor with a badly broken ankle, it was quite severe.  I just phoned 999.

“Her husband came down the stairs and wondered where his wife was. He was quite shocked but happy it was under control.

“My wife went with Isa to the hospital. Isa could have been left lying there for quite some time if Freya hadn’t alerted me.

“Cats obviously have more sensitive hearing than we do so she saved the day. ”