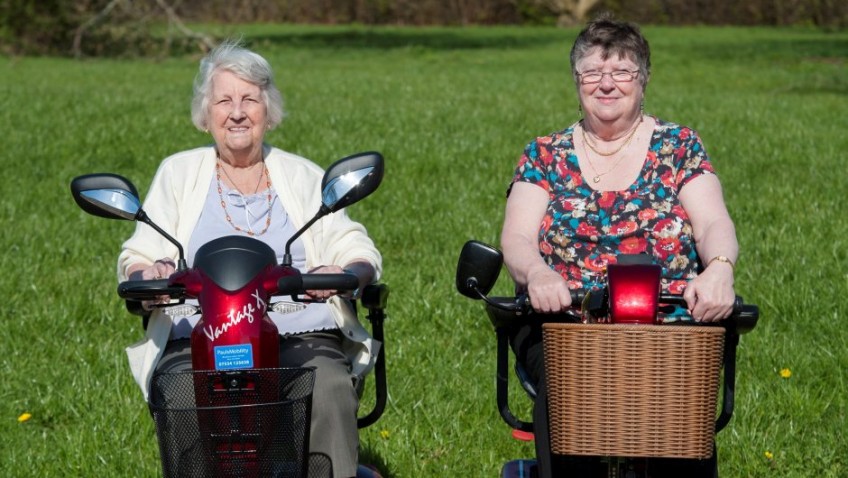 A brave 92-year-old woman told yesterday how she saved her 75-year-old friend from a mugger – by ramming him with her MOBILITY SCOOTER.

Plucky Eileen Mason was on their way back from a lunch club meeting with her friend Margaret Seabrook when the thief pounced from behind a fence.

He eyed up the contents of Margaret’s basket, mounted on the front of her scooter, before grabbing Eileen by the arm and reaching for her carrier bag.

Fiesty Eileen was having none of it and shouted “Oh, no you don’t,” and slammed on the accelerator of her scooter.

The would-be thief was knocked to the ground before the motorised pair, both of Swindon, Wilts., sped off into the distance.

The two spritely great-grandmothers said they refused to let the “weasel” bring them down.

Eileen, 92, told how she saw the villain eyeing up Margaret’s basket before he attempted to steal a brand new pair of trousers from her bag.

She said the next few moments were a bit of a blur but all she remembers is accelerating and knocking the yob to the floor.

Speaking yesterday, Eileen, who has four children, 10 grandchildren and 13 great-grandchildren, said: “I saw him look into my basket and I said ‘oh no you don’t’, really loudly.

“I put my scooter into accelerate and turned really fast. The next thing I know he was on the floor. I thought ‘my gosh’.

“Something in me just told me to turn so I squeezed the accelerator and turned and he went flying.

“He was so evil looking. We go to the lunch club every week on our scooters and nothing like this has ever happened before.

“We went through the war and all the bombings. We won’t let a weasel like that hold us back.

“I would stand up for myself again if I needed to, but hopefully I won’t need to. We will carry on as normal though, he hasn’t put us off.”

Mother-of-three Margaret, who has eight grandchildren and four great-grandchildren, added: “We came around the corner and he was just stood there by the fence. He didn’t look right.

“I heard Eileen shout so I swung around and all I saw was him on the floor. I didn’t see his face after that because he ran away so fast.

“We’ve been friends for ten years and we are always on our scooters together, nothing like this has happened before.

“I don’t think it’ll happen again now either, I certainly hope not. They were obviously targeting us because they thought we’d be an easy target – he was wrong.

“We’re just so surprised by the response we’ve had.

“We just want to warn people not to leave things on display in their baskets, put it in the back or leave it on your lap, hidden by a coat.”