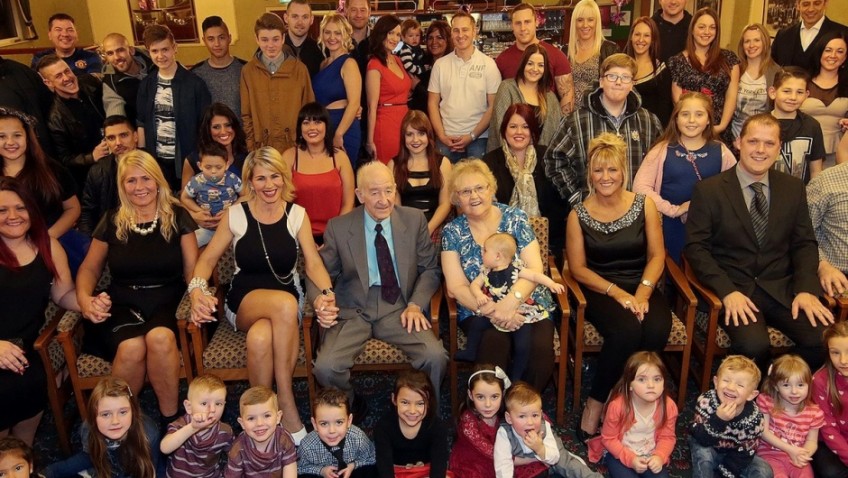 A devoted pensioner is ready for a bumper family Christmas as she buys presents for a whopping – 80 GRANDCHILDREN.

Great-great-grandmother Mary Scholey, 82, not only has to start Christmas shopping early but also gets through piles of cards every year for her expanding brood.

Mary, of Sheffield, South Yorks., said: “I never really thought I would have a big family but 60 years ago there wasn’t that much of a choice in the matter.

“I had two sets of twins and six other children so the family just kept on growing.

“Christmas is a busy time because there are so many of us but it’s nice to see everybody. It’s always busy here anyway so I’m used to that.

“When I first had grandchildren I told them to call me Nan because I thought Grandma sounded too old. All of the little ones call me Nanan, they just always have.” Family-orientated Mary, who lives with her husband Raymond, had 10 children with her first husband Jim, who died about 20 years ago.

She said: “Some of my children live away but a lot of them still live around the Sheffield area. They are not far away at all.

“I don’t find it difficult to keep up with all the names. We are not on Facebook or anything so I get all of the news about my family through word of mouth.”

Mary’s reams of relatives try to get together for special occasions, such as milestone birthdays and weddings, but it is no mean feat getting them all into one building.

Mary’s son, Stephen Gregory, did manage to organise a festive family gathering this year as an early Christmas present for his mum – which saw more than 100 family members turn up at Wadsley Bridge Working Men’s Club in Sheffield. Mary said: “It was lovely to see them all and when they saw me they were all in a queue to give me a kiss. I enjoyed that.

“When everybody was together it was easy to see how big the family really is. My son Stephen thought it would be a good idea to get the family together.”

Stephen, one of her 10 children, said: “I dont know how she does it, especially as she’s getting older — it’s amazing.

“She writes the majority or cards for herself and goes to Barnsley and Wombwell markets to find presents. It’s a massive task.”

Her offspring included two sets of twins, and the family has just kept on growing since.

Four more great, great grandchildren are due next year to join her youngest relatives, including seven-month-old Harper Blu, daughter of Neil’s daughter Keeley.

Stephen said: “With her having 10 children, we didnt need to produce many children for the family to grow quite rapidly.

“She gets a fair few visitors with grandchildren dropping in to see her.

“She’s a classic nan in that she doesn’t stand for any nonsense, but she’s very loving. Family certainly comes first for her.”

Stephen added: “It seemed like the right time of year to do it and I wanted Mum to see the majority of her family under one roof.

“A lot of my family members hadn’t even met before – particularly cousins – so it was a great  opportunity for them too.

“Most of the family live in the Sheffield area though there are a few relatives in Austria, Jersey and Australia.

“I’d be intrigued to know if there is a bigger family in Sheffield. Ten children and almost 100 grandchildren is some going — we must be one of the biggest.”