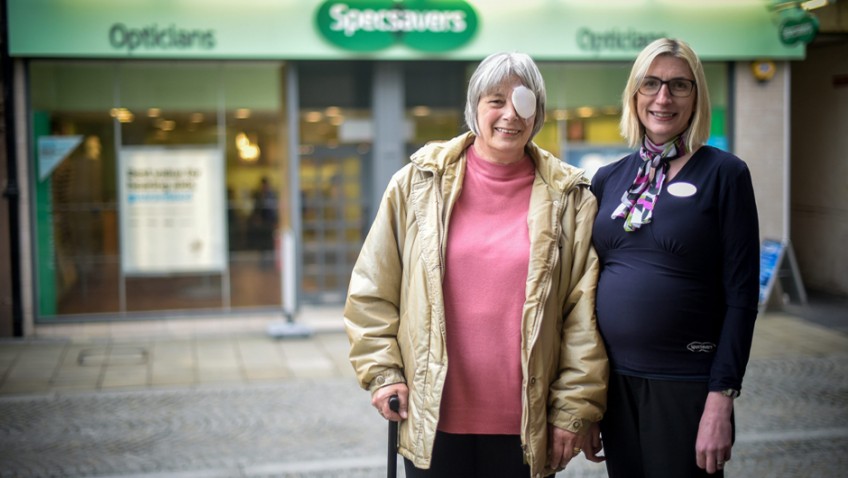 A grandmother underwent emergency surgery after being diagnosed with a life-threatening neurological disorder — at SPECSAVERS.

Sandra Wilson, 60, went to get her eyes checked because she had been suffering from blurred vision and headaches.

But her optician immediately referred her to hospital after spotting a neurological problem in her eyes.

Medics discovered Sandra was suffering from a brain aneurysm which, if it had gone untreated much longer, could have killed her.

She was transferred from Aberdeen Royal Infirmary to Royal Edinburgh Hospital where a specialist team carried out an emergency operation.

The grandmother-of-seven from Lhanbryde, Moray, still has no vision in her left eye but is optimistic she will make a full recovery.

And she believes Sinead Connolly, the optician who examined her at the Elgin Specsavers branch, saved her life.

Sandra, who is a full-time carer for her husband, said: “One night my left eye started closing of its own accord and my vision became blurred. 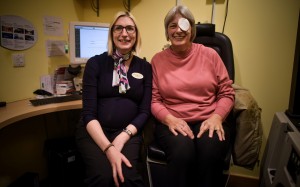 “I just thought it was a problem with my eye but the next morning, when I couldn’t get an appointment with my doctor, my husband advised me to get it checked out by an optician.

“Everything just happened so quickly from then – and I honestly thank the optician in Elgin for saving my life.

“If it had not been for her quickness I would not be here today. I recognised that it could possibly be a serious neurological condition, and immediate action needed to be taken.”

Doctors soon discovered that the aneurysm was on the verge of rupturing.

And Sandra worried that she would never see her children again when she got into the ambulance to Edinburgh.

She added: “Within 10 minutes of the doctors in Aberdeen discovering that, they had sent me to Edinburgh – they were really concerned.

“I could have had a stroke, or worse, if it burst.

“It was all happening at such a pace, but I remember thinking ‘will I ever see my children again?’ as I got into that ambulance to Edinburgh.”

Surgeons performed a coiling procedure – which is only available in Edinburgh and Glasgow – to prevent the aneurysm from bursting.

The technique involves blocking the blood flow into an aneurysm by clotting it.

Sandra remained at the Royal Edinburgh Hospital for a week after the operation, and has been told that the sight in her affected eye should return in a matter of months.

He said: “Mr Wilson was absolutely right to encourage his wife to come in for an eye check, and we wish Mrs Wilson all the best in her recovery.

“Her diagnosis highlights just how important regular eye examinations can be.

“Sandra’s husband had insisted that she should go to get her eyes checked and they must have been so relieved when Sinead spotted a neurological issue and referred her to ARI.”

Brian had previously suffered a stroke as a result of a brain aneurysm in 1983 and since their marriage in 2000, Sandra has been his full-time carer.

The mum-of-three, originally from Maidstone in Kent, moved to Moray after the couple married.