Home / LIFESTYLE / REVIEWS > / THEATRE REVIEWS / All that glisters is not Goold 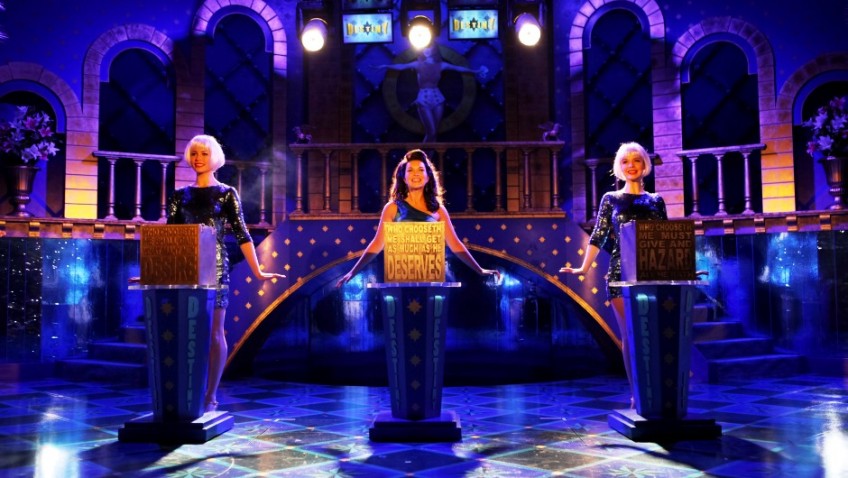 All that glisters is not Goold

If you have seen The Merchant of Venice lots of times and know it well you could get a lot of fun out of seeing what Rupert Goold has done with it.

But I wouldn’t want this Merchant of Venice to be anybody’s first Merchant of Venice. Goold uses the play to show off Goold not to show off Shakespeare. Lots of purists (and not just purists) are going to be very irritated by this bizarre and gaudy production, which was originally performed by the RSC at Stratford-upon-Avon in 2011.

The play is set in present day Las Vegas and everybody is American. Portia (Susannah Fielding, hilarious, with a Southern accent) is the brainless presenter and star of television game show called “Destiny” in which she is the prize. All the contestants have to do is to choose the right casket. The man she fancies and wants to marry is actually gay but, surprisingly, not more is made of this.

Lancelot Gobbo (Jamie Beamish) is played as an Elvis Presley impersonator and his conscience is played by two actresses. There are lots of Elvis songs. I once saw Launcelot Gobbo played brilliantly as Harpo Marx, which really worked since he is meant to be a clown.

Shylock (Ian McDiarmid, very good) is goaded into “the merry bond of a pound of flesh” by Antonio’s unconcealed anti-Semitism.  At the end of the trial, when Antonio (Scott Handy) emerges the winner, it is he who insists that Shylock converts to Christianity immediately.

His revenge always shocks but it is not surprising when you think what he has just gone through.  We, too, had just witnessed the frightening horror of the tied-up Antonio (his whole body shaking with fear) and Shylock marking up his chest and preparing to cut his pound of flesh.

Shakespeare’s great trial scene, even though the stage setting hardly suggests a courtroom, is as well played and as tense as anybody could wish. It is also very nasty. Portia is blatantly anti-Semitic and the Christians spit on Shylock.