Home / NEWS / The gift of life 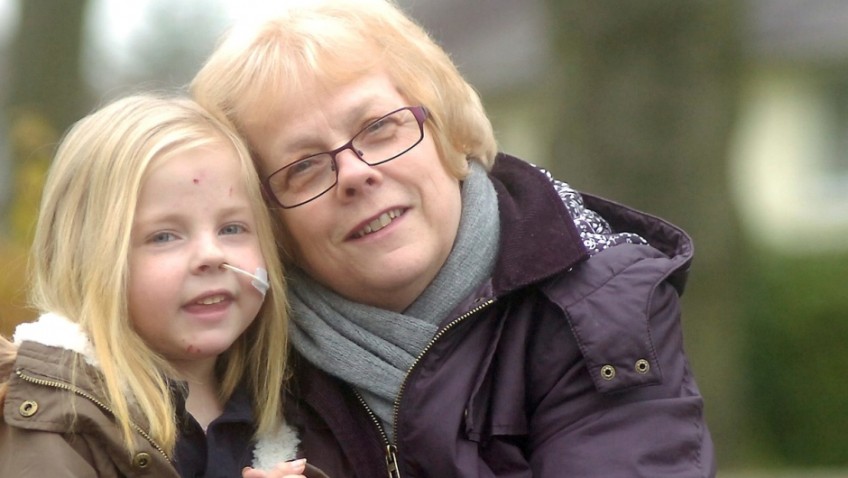 The gift of life

A five-year-old girl will today receive a life-saving kidney transplant from her 64-year-old GRAN  – the biggest ever age gap for a donation in the UK.

Little Anna Harrison faced a lifetime of dialysis after being diagnosed with juvenile nephronophthisis 18 months ago when doctors found cysts on her kidneys.

The genetic condition has seen both organs stop functioning, meaning she has to make four trips each week with her parents to Birmingham Children’s Hospital.

The youngster has been on dialysis for 12 hours a day since August 2013 but doctors have told her family this was not a permanent solution.

Now her grandma June Cantor is to donate one of her kidneys to save the battling schoolgirl’s life – despite being 59 years Anna’s senior.

June will go under the knife at Birmingham’s Queen Elizabeth hospital before the kidney is transferred on blue lights to the Children’s Hospital for her granddaughter to receive there.

Yesterday June, a medical secretary, from Stoke-on-Trent, Staffs., said: “When I found out Anna needed a transplant, I immediately said I would have tests done to see if I was a suitable donor.

“She has been such a brave little girl, I would do anything to make her life better.

“Although we were told her mum would be able to donate her kidney to Anna, I volunteered to do it because I know that when Anna wakes up from the operation, the first person she would want to see is her mum.

“I haven’t questioned my decision at all because the only important person in all this is Anna. I didn’t even have to think twice.

“She has been very poorly at times but she rarely complains. She really is an inspiration to us all. She’s not stop smiling.

“Its the only gift I want to give her this Christmas and I really want her to be well. I am not nervous about it at all, I just want it done so she can get better.”

The travel commitments have restricted Anna to only being able to attend her primary school in Waterhayes, Staffs., two days a week.

But now the family hope she will be able to return to school full-time with her gran’s new kidney  – which they have described as “the ultimate Christmas gift.”

Anna’s mum, Lisa Harrison, 38, added: “What my mum is doing is truly amazing. By donating a kidney, she is essentially saving my daughter’s life.

“When I asked my mum what she wanted for Christmas, she told me she just wanted Anna to get better and for us to have a bit of normality back. I can’t thank her enough.

“It is the ultimate Christmas gift, what more can you give to your grandchild than the gift of life?

“My world fell apart when doctors told me Anna’s kidneys had stopped working.

“She has never been in the best of health but I had no idea she had a life-threatening condition.

“Anna had been seeing a paediatrician every six months because she was said to have developmental delays.

“On one occasion, the doctor thought Anna looked very pale and referred her for some blood tests.

“At the end of June last year, she had the tests done and we found out something was very wrong.

“The consultant told me the news wasn’t ‘bad’, it was ‘very bad’. In August last year, she started having dialysis at home every day for 12 hours a night.

“Unfortunately, Anna then had an abscess in her stomach, right next to where her catheter was, so the doctors told us she would have to have haemodialysis treatment in hospital instead.”

Mum-of-three Lisa, a support worker, added: “It has been an emotional rollercoaster for the whole family but the one thing that keeps me going is Anna.

“She always has a smile on her face despite having been through so much.

“I know she misses going to school and seeing her friends when she has to go to hospital and hopefully, after the operation, she will have some normality back.” 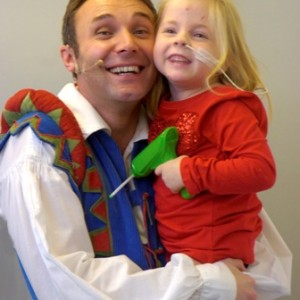 She was the guest of honour last week at the Regent Theatre’s pantomime in Stoke-on-Trent, after her wish was granted to meet Jonathan Wilkes, who plays Dick Whittington.

Anna said: “I was very excited to go to the panto and meet Jonathan.”

Medics assured June that her kidney is healthy enough to be given to a young child, despite the age gap. But the kidney is only expected to last for around 20 years.

A spokeswoman from Birmingham Children’s Hospital said: “A donor is only accepted if tests prove the kidneys are functioning well.

A spokesperson for the Human Tissue Authority added: “An age gap of this size is not common. We probably only see a handful of cases a year of grandparents donating to grandchildren.

“But we can’t remember any donation having an age gap this wide before. Even grandparents who donate are usually younger than 64.”