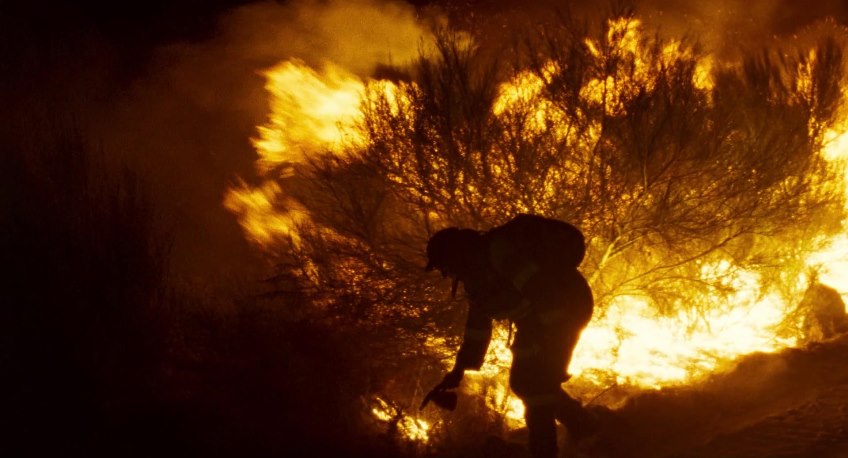 French-Galician filmmaker Oliver Laxe calls his topical and beautifully understated new film a “dry” – as in no tears – “melodrama” and populates his setting, the mist-filled, Ancares mountains in north western Spain, with local, non-professional actors, including 95-year-old former photographer Benedicta Sanchez, making her impressive film debut. Benedicta (all of the characters take on their real-life names) is the anti-hero, Amador’s, (Amador Arias) mother, and their relationship, filled with unconditional love and compassion, is one of the highlights of the film. For Amador has just be released from prison where he served two years for arson, and fire is one of the two scourges of the community.

Laxe bookends Amador’s story with ghostly, eerie scenes of the destruction of forests, silent save for the rustling and crackling of falling trees and the disturbing cries of the trombone from a score by Georg Friedrich. In the prologue, we witness the destruction of the second scourge of the forest, the invasive eucalyptus trees that middle-aged, farmer and parolee Amador calls, “a plague worse than the devil”. They strangle the indigenous plants and their deep roots consume all the water.

For Amador’s community, he is the devil, for wildfires are the primary scourge of the area. Nonetheless, when the bus returning Amador to his village arrives in the pouring rain, a man his age, Inazio (Inazio Abrao, a Galician carpenter) offers Amador a ride to his mother’s remote farm. Amador politely refuses, saying he prefers to walk. Later Inazio tells Benedicta that he could use Amador’s help turning derelict buildings into holiday lets, an attempt to build the region’s tourist trade, but again Amador declines. His mother suspects Amador is bitter because Inazio never visited him in prison, but Amador replies, ‘why would he have visited me?’

The mother-son reunion is not what we expect. At the gate, Amador sees his mother toiling in the vegetable patch and announces, ‘Hello Mother, I’m going to stay a while.’ Benedicta continues her work for a minute before walking towards the house with a bunch of greens. ‘Are you hungry?’ she asks, with no discernible emotion in her voice. But when the timing is right, she tenderly tells him, “I’m glad you’re home.’

At breakfast Benedicta talks about how she is taking their beloved cows to new pasture as they’ve grazed everything near home. For the remainder of the film, until the fire ravages the mountainside and the fate of their livestock is unknown, Amador lovingly takes charge of the cows, sometimes with his mother. Ironically, for a country ravished by fires, it is always raining in the film (a problem the patient film crew encountered until a last minute, real fire saved them).

In Galician the title is 0 Que Arde, “that which burns”, a title that opens the film to many symbolic connotations. There is the cigarette that Amador constantly smokes and the fire of the hearth as he toasts bread on an open hotplate built into the kitchen table. There are faint hints of the fire of passion in one memorable scene in which the very attractive new village vet, Elena (Elena Fernandez, a real-life vet) and Amador are taking a sick cow – riding in the back of Elena’s truck – for treatment. There is an awkward silence in the cabin until Elena breaks the silence by mentioning she hasn’t seen Amador around before, to which he answers only that he was away. To keep up the conversation Elena volunteers that she always wanted to live in the country, so she moved there to study at a veterinary school. Almador mumbles, ‘No need to study to live in the countryside’, and Elena, a good sport, admits he is right. Elena then puts on a tape of Leonard Cohen’s Suzanne, and it fills the cabin ‘I like how it sounds’, Almador replies to Elena’s question, ‘but I don’t get the words.’ In a quid pro quo that is the closest to a romantic repartee that Laxe’s minimalist script allows, Elena replies, ‘No need to understand the lyrics to get the music.’ But Director of Photography Mauro Herce’s camera will not afford us a full view of Almador’s face, so we are hard pressed to determine a smile on his sad, handsome face. After connecting the song to the characters, Laxe continues the music as the camera fixates on the nervous, suffering cow, before connecting to the landscape, allowing Cohen’s plaintive voice to fade over a panoramic view of valley.

Later in the film, however, when Almador is having a drink by himself in the village bar, Elena leaves her crowd of admirers and approaches the defensive farmer, who has figured out that they have told her about his imprisonment. Her reply, that she only came over to ask about the cow, is a signal that she is above barroom banter and gossip. But another scene in which a group of villagers taunt Almador, asking him if he has a light, ensures that the tension burns below the surface until a climactic run in with Inazio.

As with his previous film, Mimosas, Laxe tells his pared back story through the faces of his non-actors, people who blend into their landscape and feel a part of it. The sparse dialogue is used less to give us information than to enhance character and to give expression to a landscape threatened with extinction. We see Benedicta seek shelter from the rain in the hollowed out remains of a giant eucalyptus that was spared by the bull dozers in the prologue. And her forgiving nature is expressed when she replies to Almador’s almost personally bitter condemnation of the invasive eucalyptus, with this thought: ‘if they hurt others, it’s because they hurt too.’

But did Almador, who seems to be in as much pain as the sick cow he tries to pull out of the mud, hurt anyone? In the early scene in which his prison release file is processed, he is referred to as a “pyromaniac” and he is so relatively emotionless, that you wait for him to explode. Interestingly, however, the question we wanted and expected the film to answer ceases to be a concern as we spend time with Almador. But Laxe refuses to let him off the hook with an alibi during the long, mesmerising wildfire sequence at the end of the film.

Given the restraint Laxe applies to the plot, dialogue and backstory, he could afford to work into his script more of the context that he saves only for his Director’s Statement. The unusually high number of forest fires in Galicia do not all arise from lightning or a careless match. Fire is not only a tool that farmers use to regenerate land but a political tool to deflate wood prices or change the classification of plots. More context would have added another dimension to the story and to Almador whose name means, “he who loves”. Is he really an arsonist, or a scapegoat, or maybe even a saint who turns the other cheek? This would add weight to the words of a prison official when he reads of Amador’s release, “God help him.”