Home / LIFESTYLE / REVIEWS > / The Famous Five, an infamous one and some fascinating facts 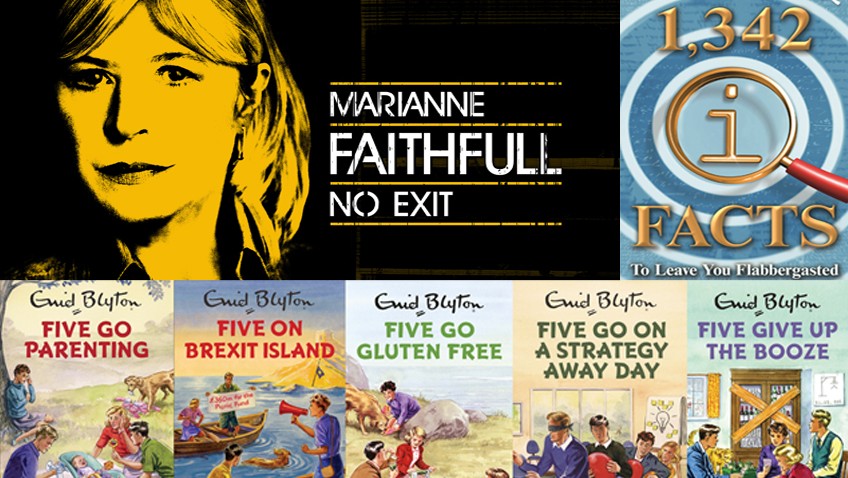 The Famous Five, an infamous one and some fascinating facts

Following on from the hugely successful Ladybird Books re-written for adults in the series “How it Works” we now have a new take on Enid Blyton’s Famous Five.

Written by Sunday Times bestselling author Bruno Vincent and inspired by Enid Blyton, The Famous Five’s grown-up adventures will remind older readers of the unbreakable bond between Julian, Dick, Anne, George and Timmy, while introducing newer readers to the lashings of fun you can have with a few friends and a dog.

Enid Blyton’s best-loved characters are reimagined for grown-ups, in these five funny, clever new tales that see them confronted with the challenges of modern life. The five find themselves on a puzzling ‘strategy away day’; attempt to find a good gluten-free cream tea; prepare for parenthood; and, in perhaps the ultimate test of their friendship, grapple with the Brexit referendum and in the latest volume, forsake alcohol.

In an increasingly confusing world it is comforting to know our childhood companions are struggling to cope with modern life complications.

The books are published by Quercus and are now available in hardback RRP £7.99

Quite Interesting Facts to Flabbergast

It is 10 years since the first QI book, The Book of General Ignorance, was published and topped the bestsellers list.  Since then over 3.3million QI books have been sold.

And now we have the latest, 1,342 QI Facts so more trivia to leave your flabber so gasted in the words of Frankie Howerd.

John Lloyd is the creator of QI and his team of elves work tirelessly throughout the year to bring us the fascinating data that is as entertaining as it is interesting. ‘The QI Elves’ are the people who research, write and produce QI in all its guises – television, radio, books, games, apps and internet thingies.

The television programme started in 2003 with Stephen Fry being persuaded to take the chair for the pilot and fitting so comfortable in the role that he continued to host the panels of Alan Davies and three different comedic personalities each episode until 2015.  This year Sandi Toksvig has become chairperson and this has altered the dynamic between the contestants bringing a fresh atmosphere to the programme.

The ethos of the show is not just about sharing pointless information but finding connections and hidden patterns like the best comedy. Curiosity is part of our psyche as Thomas Hobbes the 16th century philosopher explained, “The lust of the mind that exceedeth the short vehemence of any carnal pleasure”.

So many fascinating facts to share in this book and in homage to the new television host I give you two:

This book is made for sharing and just the thing for the elves to select for a Christmas stocking.

Published by Faber and Faber on 3 November in hardback RRP £9.99

As Tears Go by

It is astonishing to consider that Marianne Faithfull has had her 50th anniversary in music. From releasing hit single ‘As Tears Go By’ at the age of 16, followed by a string of music albums and film appearances she continues to celebrate her remarkable career in the music business.

Listening to the latest album, No Exit, which was recorded during live performances in Europe in 2014 for her 50th anniversary tour, the seminal songs that defined her as the wild child of the 60s are all here sung with all her experiences in her smoky voice.

Famous for her hedonistic lifestyle, the beautiful vulnerable 16-year-old girl who broke hearts with her first hit to the drug raddled damaged woman, she epitomised the swinging sixties. Now over half a century later she continues to delight her audiences, many of whom have accompanied her on her journey and survived.

Battered but unbowed Marianne  has developed into the woman who is listed on 100 Greatest Women of Rock and Roll list and received the World Lifetime Achievement Award at the 2009 Women’s World Awards.

They say that if you can remember the 60s you weren’t there but surely no-one will forget Marianne Faithfull.

Included with the music is a DVD of her live concert in Budapest in 2014.

No Exit was released at the beginning of October on the EarMusic label.