Bristol Grandparents Support Group are delighted to announce that Esther Rantzen has agreed to be patron of their charity. 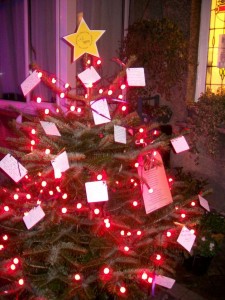 The Tree of Hope

The charity was set up in 2007 as a result of Jane Jackson losing contact with her granddaughter due to family breakdown.

BGSG supports grandparents all across the UK  who are going through this ‘living bereavement.’

Esther’s involvement came about  when Jane asked her if she would like to write a message for their “Tree of Hope,” a Christmas tree that they have in their garden every year for grandparents to come and write messages to their estranged grandchildren.

Two films with Esther and The One Show followed at the beginning of this year.

Jane says, “To have Esther as patron is a huge privilege, as founder of Childline and The Silver Line she brings with her experience, knowledge and empathy .”