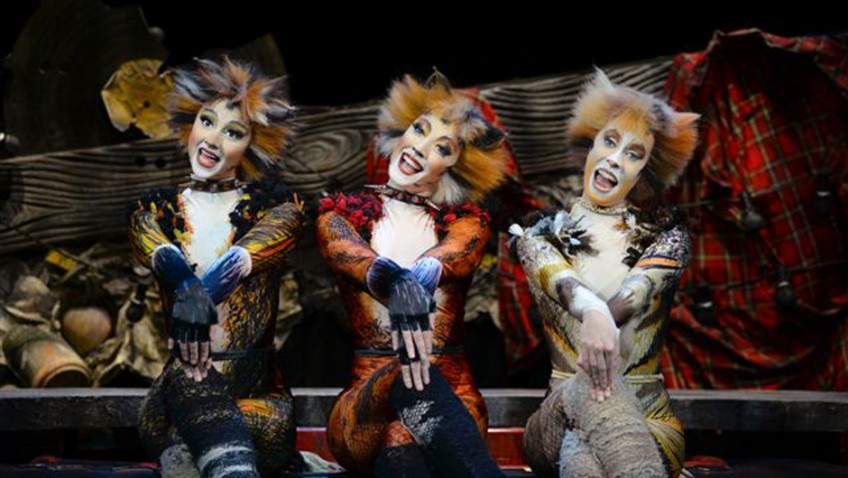 The prospect of twenty-odd men and women dressing up as a rag-tag bunch of crazy street cats to cavort on stage for two hours with little by way of storyline, may not appeal to all. But it’s not for nothing that Cats has had more than 9,000 performance lives since the early eighties and is still going strong. Gradually, with feline stealth, the show’s charm and magic grow and grow, our gasps and wows of delight accelerating through Act Two until, by the end, no one can quite believe what they’ve seen.

The combined spectacular delights of set, lighting, pyrotechnics, Lloyd-Weber’s score and the captivating character creations of TS Eliot are superb. Meanwhile, the cast boggles our minds by coupling accomplished operatic singing not just with incredible dance and acrobatic skills, but with fine stage presence and with vibrant character creations that ensure our total emotional involvement.

Spilling out front stage and filling the 3D depths and heights in the splendidly ancient grandeur of Leeds Grand, is a visual junkyard feast of debris and litter. Giant newspapers, boxes, cans and packets for well-known brands, clothes, wheels, pipes, bedstead, car parts, an oven and a gigantic tyre await further creative uses, helping conjure up a steam train – with smoke, doggy disguises for cats, outfits for bug-eyed, tap-dancing flies and a most unlikely, mist-belching, space-age elevator to Heaven. There’s a definite other-worldly quality to the set with its huge, planet-like Jellicle moon, the ethereal atmosphere enhanced through a vast choreography of lighting as coloured beams radiate from above, while lights are strung even into the auditorium (aisles and boxes also being used by the cast.) And there are giant jump-leads, too – say no more! As decibels alternately pound or quieten to mystical tones, 1980’s sounds and Gillian Lynne’s choreography mix with newer updates. Considering the performers are, in fact, mere humans, some of the highly sustained, energetic stamina of the dancing from our ensemble of motley cats in leg-warmers simply has to be seen to be believed. Some fabulous soprano work emerges too.

As main narrator and audience engager, Munkustrap, Matt Krzan is striking and imposing all round, while Rum Tum Tugger is now a bling-wearing, tattoo-marked, break-dancing rapper of a cat, courtesy of Marcquelle Ward, who needn’t be afraid to up his oomph and showy strut still further. Kevin Stephen-Jones brings us a wise, gentle, revered, loveable, lion-headed yeti of a cat leader – Old Deuteronomy, who must choose tonight at the Jellicle Ball which cat is to be reborn into a new life. From Greg Castiglioni comes impressive versatility, first as a Mr-Tumble-like Bustopher Jones, then as decrepit old Gus, the theatre cat who springs back to his Fiend of the Fell acting days as Growltiger, the piratical, full-voiced terror of the Thames. Lots of fun.

Comedy and fun are epitomised beautifully, too, by Joe Henry and Emily Langham as Mungojerrie and Rumpelteazer, their duet of singing, dancing and united cart-wheeling deservedly much applauded. Greatest applause and shouts of delight, though, are for Shiv Rabheru as magical Mr Mistoffelees and for Marianne Benedict as poor ex-glamour puss Grizabella. From the outset, even as Quaxo, Rabheru shows special talent. In ballet and acrobatic skills, he is phenomenal as the sparkly-clad Mr Mistoffelees, his exhilarating, joyous rounds of pirouette turns truly magnificent and too many to count. He sings well too. Of course, the greatest number, Memory, belongs to broken, tottering, pathetic, dejected outcast Grizabella, Marianne Benedict reserving full voice rendition for just one chorus of the song and achieving that spine-chilling, hair-prickling, heart-wrenching quality everyone craves.