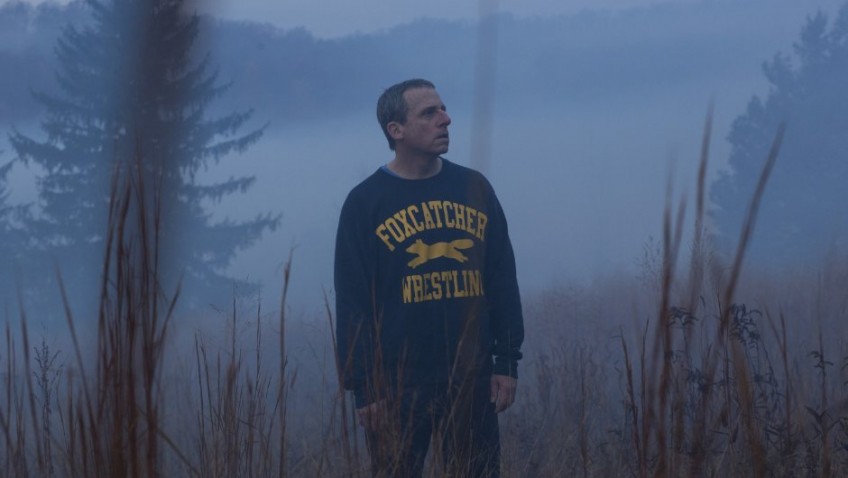 A dramatic transformation of Steve Carrell in Foxcatcher

Foxcatcher is a chilling tale of the American dream gone sour. It might be based on real events and people (at least one of whom cooperated in the making of the film), but critics who divulge the ending on that basis are doing the film and viewers a disservice.

At a press conference, Director Bennett Miller said that the fact that the story was not well known served his purpose. Foxcatcher can be certainly holds up, and can be appreciated on a second viewing, but the slow, steady tension that builds throughout the film, culminates with a real punch in the gut when the ending is unknown.

Miller, who wrote and directed the Academy Award winning Capote and the entertaining, deceptively profound Moneyball, imbues true American stories with a haunting metaphorical under current.  He, and writers E Max Frye (Something Wild) and Dan Futterman (Capote) assure that the film never comes across as a reverential true story or even a biopic.

Mark Schultz (Tatum) is a struggling former (1984) Olympic gold wrestling champion, living in a run-down rented flat. Aside from filling in for his brother Dave (Ruffalo), and delivering the odd patriotic, motivational talk to school children, his empty, solitary life revolves around training sessions with his older brother.

Dave, also a 1984 Olympic gold medal winner, now has a coaching contract, a loving wife (Sienna Miller) and two children. Both brothers, who suffer from their peripatetic childhood, crave security.

One day Mark gets a mysterious call from a man calling himself John Du Pont and it is clear Mark has never heard of him. Nor perhaps have many viewers. On the other side of the country, near the historic Valley Forge in Pennsylvania, John Eleuthere du Pont (Steve Carell) shares the palatial house on the sprawling, Foxcatcher thoroughbred  farm with his wheel-chair- bound mother (Vanessa Redgrave, terrifying).

John, in his fifties, is a would-be wrestler who hates horses, while his mother considers wrestling a ‘low’ pastime, beneath her son. John, a lonely, only child and man with visions of making America great again through Olympic wrestling, is determined to prove his mother wrong. He has had his eye on the Schultz brothers

The offer seems too good to be true, but Mark jumps at it, buying into Du Pont’s crafty psychology that promises to pull Mark out from under the shadow of his brother.  Du Pont will pay a generous salary and fund his training for the 1987 World Championships and the 1988 Summer Olympics in Seoul.

Mark is given the use of a luxurious guest house and purpose built training gym, which eventually becomes home to the US Wrestling Team, after Du Pont negotiates a financial deal with the US Olympic organisers.

Gradually, Mark, who is not the swiftest of minds, becomes aware that he is under the shadow of du Pont, who, unlike Dave, is incapable of having his best interests at heart. Du Pont has a severe personality disorder that will lead him to assuming the role of Mark’s coach, mentor and father figure with disastrous results.

Watching Mark struggle at the 1987 National Championships until Dave helps him win, Du Pont realises that he and Mark need Dave. Eventually, Dave, too, attracted by the stability and security Du Pont offers his family with the dream job of joint coach (along with Du Pont) of the Olympic wrestling team, becomes trapped in the sordid life of this billionaire philanthropist – the scion of a family that made its billions through armaments and chemicals.

The fluctuating psychological battle of wills between these three men, and the performances of the great actors who portray them is what makes this story so thrilling. Behind it lays the magnetic power of money and class to attract, corrupt and destroy.  Ruffalo has physically transformed himself almost beyond recognition, and Channing excels, as he did in 22 Jump Street and Magic Mike, as the bulked-up sensitive giant. As Miller taps into the American myth, you could say he is Lenny to Ruffalo’s George in of Mice and Men.

But it is Steve Carell’s transformation from funny man to the frightening Du Pont that is most impressive. He maintains a psychotic stare, impossible to read; deliberated, slow diction, and stiff posture, with his hands often behind his back. His large prosthetic nose juts his head upward and forward with the mouth slightly open, as though he were a bird of prey pecking at your soul.

In a humorous moment, and there are a few light interludes, Du Pont, the self-aggrandised patriot, tells the awe-struck Mark, ‘Most of my  friends call me Eagle or Golden Eagle, or John, or Coach.’  In fact, in a moment of intimacy, he tells Mark that his only friend had, he learned, been paid by his mother.  At this point in a compelling film that allows the drama to unfold like real life, we are not surprised, but can still summon up some pity.