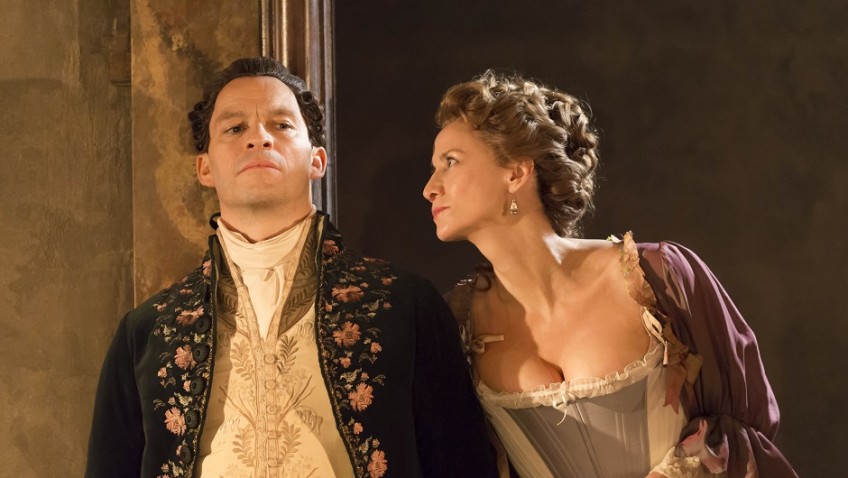 When LES LIAISONS DANGEREUSES was first published in Paris in 1782, it was an immediate succes de scandale and sold out within a few days. Eagerly read by young ladies, but only behind locked doors, its heartless immorality both shocked and thrilled.

Christopher Hampton’s adaptation has an aristocratic wit and Josie Rourke’s production and the performances of Dominic West and Janet McTeer have the sophisticated polish it needs. The ladies are handsomely costumed.

Dominic West has the arrogance and charm. Janet McTeer has the viciousness.

Merteuil, keen to have her revenge on her lover for deserting her, asks Valmont to seduce the lover’s fifteen-year-old virginal bride-to-be, who has only just left the convent. She offers a night of love in return.

So certain is Valmont of his success that he offers to seduce also the virtuous Madame de Tourvel (Elaine Cassidy). The seductions are carried out with utter ruthlessness. He relishes the idea of seducing a woman celebrated for her religious fervour, her happy marriage and her strict morals. The virgin (Morfydd Clark) proves an easy conquest. But the real battle is between him and Merteuil.

The Marquise, totally confident in her allure, guile and cruelty, a virtuoso of deceit, knows women have to be inventive to survive in a man’s world where reputation is quickly lost.  She controls Valmont by denying him her sexual favours.

Valmont, a compulsive womaniser, out of control, is redeemable. Merteuil is not. The play ends with her looking forward to the 1790s wondering what the decade will bring. I do not think there is any doubt in the audience’s mind that she will be among the first to be guillotined.

Les Liaisons Dangereuses will be broadcast live in 600 UK cinemas on 28 January 2016.