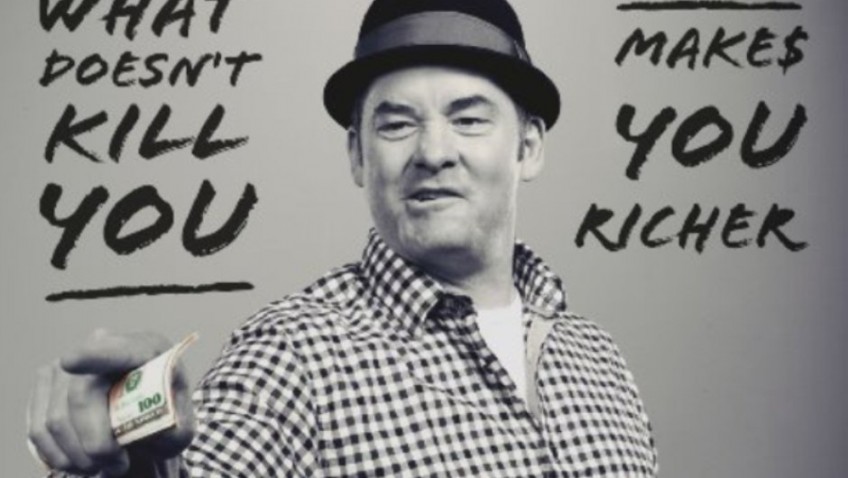 What doesn’t kill you makes you richer

Cheap Thrills, the directorial debut of American writer (The Possession, The Pact) and independent producer E.L. Katz, has been labelled a very ‘black comedy’ and is getting quite a buzz from critics and word of mouth.

Though anything but comic, the film is brilliantly acted and well written and directed. But underneath a glossy veneer of originality is a familiar morality tale about how low men will go for money and an excuse for one of the most revolting and mean-spirited films of the year.

Thirty-something Craig (Pat Healy) kisses his lovely wife and adorable baby daughter goodbye.  He has traded his dreams of being a writer for a happy home life and a guaranteed pay cheque with a job at a garage.  He stares at an eviction notice on the door of his cramped flat before heading off to work, only to be made redundant.  Reflecting on his options over a drink in a dark bar, he bumps into Vince (Ethan Embry), a high school friend a would-be musician now working as debt-collector for unscrupulous lenders.

Vince is attracted to a sexy young blond, only later noticing that she is with an older tycoon.  The couple, Colin (David Koechner) and Violet (Sara Paxton), buy the friends a drink and engage them in a round of harmless, but humiliating pranks, throwing around large sums of money.   Momentarily forgetting his troubles, Craig tells his wife that he will be home late, but soon finds himself too drunk on expensive tequila to go home.  When the foursome return to the couple’s home in the L.A. hills, the game of dare that had begun in the bar turns into an increasingly nasty and high-stakes dual to the death.

The appeal of Cheap Thrills is that it is an adult horror/slasher film rooted in everyday life. The haunted house or the isolated lodge where partying teenagers become prey to a lunatic in the woods has been substituted for a less remote millionaire’s home where Craig and Vine have only themselves to fear. The silly, randy teens have become an unemployed family man who falls prey to his need to pay the rent.

But like any horror or slasher film, Cheap Thrills is not for the faint hearted. As the prize money increases and the dares become increasingly nasty, Craig’s self-destruction becomes difficult to watch.  The irony is that being the responsible, straight, family man makes Craig more willing to sacrifice his humanity than the low-life loner Vince. richer

Under the gloss of a well-made film, a clever script and a star performance from Pat Healy, Cheap Thrills is a thinly-disguised allegory of something we see all the time, albeit without this degree of revulsion. And is there that much difference between the Wolf of Wall Street and Cheap Thrills when it comes to showing two decent men humiliate themselves, destroy lives and then self-destruct for money?