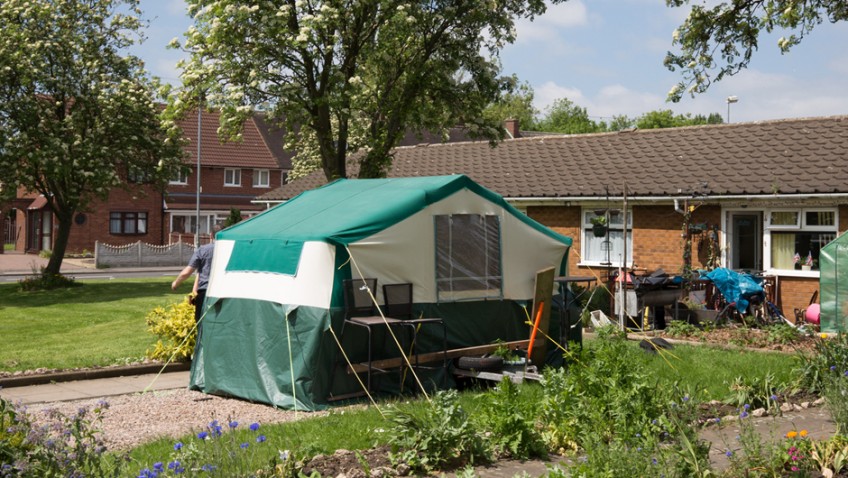 A disabled army veteran who is waiting for council chiefs to find his family a bigger home has been forced to sleep on his front lawn – in a TENT.

John Tompkins, 71, took custody of his two teenage daughters Lauren, 15, and Elise, 14, and 12-year-old son Lewis in February this year.

He was forced to move them into his one-bedroom bungalow when their mother, who is his ex-partner, became too ill to look after them.

The pensioner sacrificed his bedroom for the daughters and initially slept on the sofa while Lewis was forced to kip on a mattress in a “cubby hole”.

But after many sleepless nights he came up with the idea of pitching up a tent in the front garden of his home in Walsall, West Mids.

John and Lewis now sleep in a 12ft (3m) by 9ft (2m) white and green Suncamper tent which is tethered to the ground next to his car.

The dad-of-three has been told he has been given “gold band” priority by his local authority but is still waiting for a bigger property four months on.

Yesterday (Thurs), John, who served in Northern Ireland, said: “The trouble is we can’t all cram into a little bungalow. Its just too small. “My two girls needed their privacy, it was all a bit overbearing for them and we were getting to breaking point.

“I’ve only been sleeping in the tent for three weeks and obviously it’s not a long-term solution but I’m doing the best I can to make it as a comfortable as I can for everyone.

“My age doesn’t help, I’m knocking on a bit now but I’m happy to have them, in fact it’s given me a new lease of life.

“I got the girls some guest beds but Lewis had to bed down in a cubby hole, like a storage area, which was a bit claustrophobic, so he loves the tent.

“It’s like a den for him. We have a bit of man time here.

“But its not ideal and we need a bigger home as soon as possible.”

John, who was in the 39th Infantry Brigade Headquarters and Signals Squadron at Thiepval Barracks in Northern Ireland, served there from 1967 until 1988.

The former bus and truck driver retired early from his last driving job on health grounds following work-related injuries and has lived in his bungalow for six years.

Doctors have warned him that sleeping outside under the canvas isn’t recommended for his leg and back injuries.

John is now desperate for bosses at Walsall Housing Group (WHG) to provide the family with something more suitable but said his neighbours have been supportive.

He added: “They’ve been great.

“Marian does a lot of baking and has been bringing treats round for the kids while Pat makes sure there are treats for the children and the dog.

“We have lovely neighbours who have been doing their best to rally around and support us.

“We love it here but it can’t carry on.

“‘It’s an impossible situation. I can’t entirely blame them (WHG) as there aren’t enough properties available but in Rushall it seems to be a case of waiting for someone to die.

“While we wait I felt I needed to give the girls a bit of privacy and put up the back end of a trailer tent in the garden for me and Lewis about three weeks ago but it’s not a permanent solution.

“They all go to Aldridge School, although Lauren’s just finished and will be going to college in September but they love it there and I don’t want them to have to move.”

Robert Gilham, corporate director of operations at WHG, confirmed John had been given the highest priority for people who need to move for “severe overcrowding”.

He added: “When Mr Tompkins first moved into his current one-bedroom property it suited his requirements.

“Unfortunately his situation has now changed and he needs a larger property.

“We are working with Mr Tompkins to do all we can to help him move to a more suitable property with his children.

“Mr Tompkins has been given gold band status, which is our top priority for customers who need to move due to severe overcrowding.

“We are also in the process of direct matching him with a property that meets his needs as soon as one becomes available.”