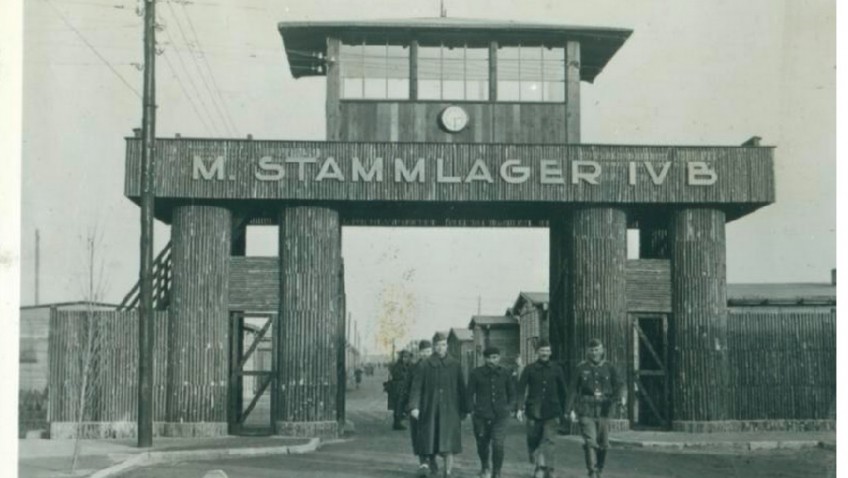 This account of a prisoner of war, who found himself stranded in Soviet occupied territory at the end of the Second World War, has been sent to us by his son in law and is a fascinating insight into the struggle to get himself back to England.

After three and a half years as a POW, in Libya, Greece, Italy and Germany, the war was finally over. At the end of April 1945 Dick Jones left Stalag IVB, which was in the Soviet occupied sector. The camp had already been abandoned by its former guards and liberation had come in dramatic fashion. Cossacks had arrived on horseback and shot the locks off the gates.

Dick was part of a group of British servicemen who were hoping to make their way home by heading for the American controlled sector, not far away to the west. The column had walked for fifteen miles before reaching Riesa, a crossing point of the River Elbe. On a whim, Dick and his mate, Paddy, decided to absent themselves from the rest of their comrades and take a chance on their own. They wandered off down a side street.

Dick himself described how this came about.

“I seemed to lose contact with all my close friends, except Paddy. I don’t think I ever knew his surname. We had acquired a wheelbarrow onto which we put our possessions. After marching all day we came to a town between Leipzig and Dresden called Riesa. It was fairly badly mauled. It became known that we were to be put into some German barracks. Paddy and I were not in agreement with this and at a convenient moment slipped down a side street and hid.

Wandering around later, we found a tobacconist’s shop. Cigarettes were always a problem so this looked a promising place. We knocked and when the frightened Germans answered, we explained we were British prisoners looking for a billet. This seemed to them a better bet than the revenge crazy Russians.

We were admitted voluntarily, arranging for us to sleep in the shop. The arrangement worked well. We would answer the door to Russian marauders, explain we were British POWs and they would shake our hands, back slapping all round and go away. In return the Germans would supply us with cigarettes.

We had to survive as best we could, scrounging and stealing food and supplies. It was dangerous and at times life risking. Russians shot first and cleared the bodies away later. They did not differentiate between stealing Germans or British. We had no idea how to get home and were living in a chaotic world.

V.E. Day came, not that we knew until a Russian tank  commander, looking for billets for his men, called at the shop and told us.

The tank commander instructed his men to bring food and they brought what looked like half a cow, asking the Haus Frau to cook it. After her initial horror, he tempered his request to cook enough for a meal to celebrate V.E. Day. I had been looting in the larger residential houses and had acquired silver plated cutlery and serving trays, so the banquet was served on these, plus plenty of vodka. Paddy and I kept sober. Russians are very unpredictable when drunk.

Within a couple of days, I was walking along a road, when I met an army padre who informed me there were trucks at the end of the road to take us to allied lines. I dashed back to the billet and told Paddy. Paddy, a regular army soldier, single with no ties, thought for a moment, smiled and said, “You go Dick, I’ll take my chance here.” He had become fond of the Haus Frau’s daughter. I often wonder what became of him and I shall never forget his friendship.”

In the ungovernable void that appeared in parts of Central Europe as the German army eventually capitulated, some former prisoners and large numbers of refugees were reliant on their own efforts to get home. It was not always an orderly repatriation. Bartering of numbers between the powers for prisoner exchanges was also commonplace. It seems that displaced people of various nationalities were on the move in many directions.

Dick eventually made his way home, crossing the white cliffs in the nose-cone of a Lancaster bomber. The rest of his own story, including his capture and the lead up to his release, is included in the biography, “Dick Jones of the Hoylake Horse.”

You can buy your copy of this book here: