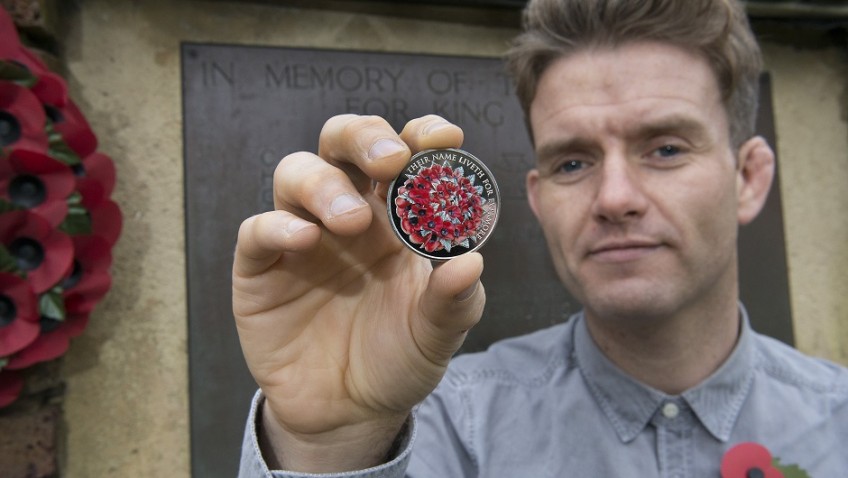 A Royal Mint Coin Designer has taken inspiration from the wreath that lies at the foot of The Royal Mint’s own on-site war memorial for the design of the organisation’s 2016 commemorative £5 Remembrance Day coin. The memorial is formed of bricks from The Royal Mint’s previous location on Tower Hill, and honours colleagues who have lost their lives in times of war. Thomas Docherty, originally from Bellshill near Glasgow, is the fourth Coin Designer to be selected to design the special Remembrance Day coin, which traditionally features the poppy, a flower widely recognised as a symbol of remembrance. Thomas’ design depicts a wreath, a symbol used by nations across the world to remember and commemorate the fallen.

Thomas said of his design: “This wreath is not only personal to us at The Royal Mint but also reflects the ‘everyman’ we all commemorate on Remembrance Day; from the wreath-layers to the poppy wearers all over the country. I wanted to paint the colours of the poppies boldly and vibrantly, hopefully emphasising that the poppy is a symbol of remembrance, but also one of hope for the future.” The coin, which is available in Silver Proof and Brilliant Uncirculated finishes, has been colour-printed using a technical ‘trichromatic’ printing process that layers colour onto the coin to capture every detail of the vibrant red colouring of the poppy.

This well-known passage is often read on Remembrance Day. The words were also chosen by novelist and poet Rudyard Kipling for inscription on war memorials, when he was a member of the Commonwealth War Graves Commission. He was devastated by the death of his only son John in the conflict in 1915, just six weeks after his 18th birthday.