Home / LIFESTYLE / A degree of achievement 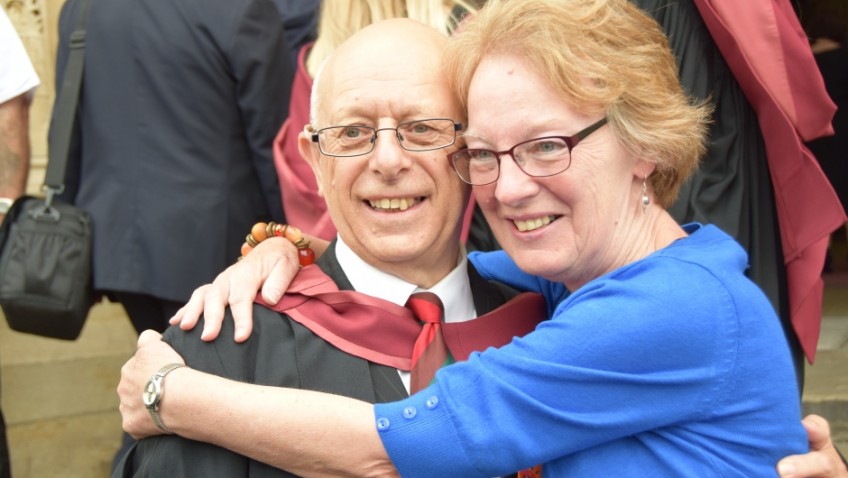 A degree of achievement

A 69-year-old grandfather from Bristol has graduated after his dyslexia was finally diagnosed six years ago.

Despite having a love of reading, Richard Abraham left school at 15 with no qualifications and had never written an essay in his life.

After reading about the University of Bristol’s part-time BA English Literature and Community Engagement degree in the local newspaper, Richard decided it was time to give formal education another go.

It was only then that his dyslexia was diagnosed and the quest to fulfil his academic potential began at the age of 63.

The grandfather of six, from Knowle, will join his University of Bristol course mates when he graduates with a 2.2 after six years of hard work, overcoming two strokes along the way.

He said: “At school I understood what I was being taught but didn’t understand why I was failing. When I was 13 I was put in remedial class and found it really frustrating. Back then no one really knew about dyslexia and there was certainly no support. Two of my children are dyslexic so I did wonder if I might be too.

“I thought I’d missed out but when I read an article in the local paper about a lady in her 60s who’d embarked on this degree with no formal qualification, I thought I’d find out more.

“I told the tutors about my concerns and they arranged a test which identified that I was in fact dyslexic. It felt like justification for what had happened and struggles in my life.”

The University provided extra support to help Richard with his dyslexia, including a laptop, some software, extra time for written exams and being allowed to do them on a computer.

As part of the community engagement aspect of the degree, Richard started a book group for mature students at the University, which ran for six months. He also set up another book group, this time closer to home, which has proved a hit.

He explained: “I’ve lived in my house now for nearly 30 years, and though I knew my neighbours’ names, that’s only because I used to get their post. I went knocking on doors in the roads surrounding mine with flyers and told them I was interested in setting up a book group. We ended up with about 12 people.

“That was four years ago and we’re still going. The book club has turned our little square into a little village. It’s worked really well.”

Richard describes the overall experience of the degree as overwhelmingly positive, even though his wife thinks he has turned into a hermit, often locking himself away in their dining room, which he admits has been taken over by books.

Richard, who plans to spend more time at his holiday home in Wales now he’s graduated, said: “The degree has given me some self-esteem. It’s made me feel better in myself. I think I’ve done it on behalf of my brothers and sisters as well, who all left school before 16.

“The last six years have changed the way I think about things. At 69, it’s given me another level of maturity. And, to be honest, I think being a student has kept me younger.”

Despite his learning disability, Richard had a successful career, which began with him working as a trainee for Bristol Siddely – an aero engine manufacturer which is now Rolls Royce. After moving up within the structure of the company, he then joined the armed forces, and later became a full-time Trade Union official – by which time computers and spell check were in place to help.

He added: “I’m quite satisfied with what I ended up doing in the end, my working life was quite interesting and I always did well at practical work. But if my dyslexia had been recognised when I was 16 or 17, there are things that I could have achieved a lot quicker than I did end up achieving them.”