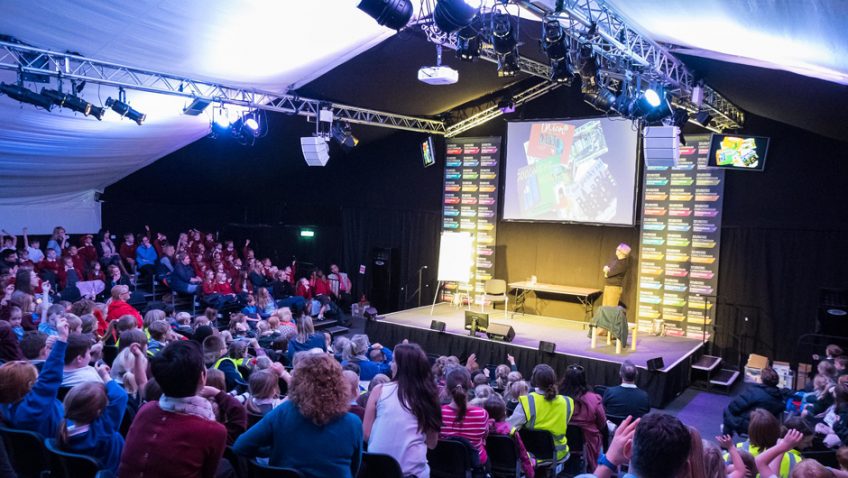 Make your way to the cultural capital of the west

Sponsored by the Times and The Sunday Times with Waterstones the Festival boasts speakers and discussion from a huge variety of topics such as Current affairs and politics, Art, Cookery, Nature, Science and technology, History, Children’s literature and of course Fiction.

Some of the wonderful highlights at this year’s event, the UK’s oldest and most prestigious literary festival, are now booked to appear. Alongside literary heavyweights Salman Rushdie, Philippa Gregory, Alan Hollinghurst, Sarah Waters, Edward St Aubyn and Joanne Harris, chefs, comedians, athletes and the stars of the stage and screen will be descending upon the Festival Village for ten days of literary revelry. Michael Parkinson will be in conversation with his son about his legendary career, Andrew Marr tackles the subjects of inspiration, creativity, politics, beauty and form, and Tim Bentinck goes behind the scenes of The Archers exploring what it is about this iconic drama series that holds the country in its grip.

Some of the biggest names in British sport will include Judy Murray, Tom Daley, Jonny Bairstow discussing and former England cricket captain Mike Brearley. Leading the history and ancient world line-up will be Simon Schama introducing the second instalment of The Story of the Jews, and Robert Harris will discuss the RSC’s adaptation of the Cicero Trilogy with Mary Beard. A tantalising foodie selection is on offer from home cooking champions Mary Berry, Nigella Lawson, and Kirstie Allsopp, to award-winning chefs Tom Kerridge, Claridge’s Martyn Nail, and Victoria Summerley reveals the private gardening passions of some of Britain’s foremost creatives in this beautifully illustrated tour of their private sanctuaries.

Brendan Cox will talk to his friend Jess Philips about life without Jo, BBC Radio 4’s Today programme will celebrates 60 years on air with Justin Webb and Nick Robinson, and Alastair Campbell will give his candid view on the end of the Blair years and the transition to Gordon Brown’s troubled premiership.

A family-friendly Festival Village comes together in the heart of Regency Cheltenham, complete with food, drink, live performances and free activities. Around 1000 speakers will take part in over 550 events and literary happenings. The Festival theme is Who Do We Think We Are? asking key questions about British identity and celebrating Britain’s rich literary and cultural heritage.

The programme brings together some of our brightest minds, most incisive commentators, literary greats, fresh new voices and stars of stage and screen. The diverse programme covers history, current affairs, visual art, sport, food, fashion, lifestyle, psychology, science and business as well as fiction, poetry and a Family programme packed with events and workshops for toddlers to teens.

As well as the revamped Festival Village, a series of themed events and fine dining takes place in The Daffodil, a sumptuous art deco venue, and free after-hours comedy, spoken word and music at the Festival Club @ Hotel du Vin. On the first Saturday night of the Festival, last year’s highly successful Lit Crawl returns– transforming a bar crawl into a fast-paced night of free literary delights.

A regular attendee of this amazing event I can recommend this as well worth attending for the whole time, a few of days or even just a day trip. There is plenty to do, see, hear eat and converse with other festival goers.

Tickets go on sale for members from 30th August and the general public from 6th September
www.cheltenhamfestivals.com/literature or telephone Box Office 01242 850270