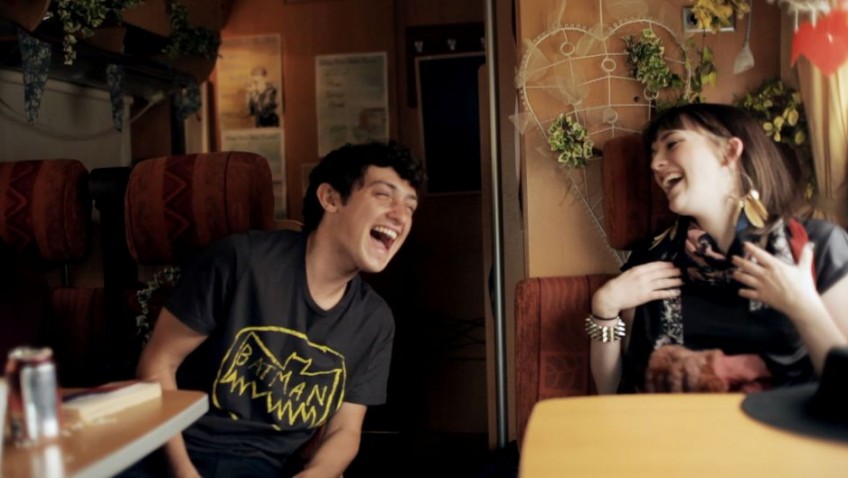 With six or more films released almost every week in the UK, 32-year-old Welsh Writer/Director Jamie Adams’ feeble Benny & Jolene will be squeezed out by more solid or just plain interesting fare. The two young stars, Charlotte Ritchie (Fresh Meat) and Craig Roberts (Submarine), have talent, but it is not put to good use in a lacklustre, rambling, ‘road’ movie devoid of wit or consequence.

Benny (Roberts) plays the guitar with an expressionless, boyish face that only shows signs of life when he looks at 19-year-old Jolene (Ritchie), his co-writer and singer in their two-person folk music act.  The duo has just enjoyed a taste of success and is heading for their first music festival. But relations between the two are strained as, unlike Benny, the pretty, outgoing Jolene wants the act to be more commercial.

We know that behind the glamour of the music business boring hours and days are spent in tour buses, hotels and waiting rooms, but seldom has an audience been subjected to this tedium so convincingly. When the pair arrives at a rainy, cold campsite near the festival their spirits are as dampened as their clothes when the tour manager announces they do not have a slot after all.  Tempers flare and both Jolene and Benny pretend to have sex with someone else.

The gist of this plotless movie is that Benny and Jolene’s entourage (which includes Jolene’s lesbian mothers) interfere with the dynamic of the duo, pulling them in different directions and driving a wedge between them.  This confusion is apparently a cloud with a silver lining because it forces the two to admit their feelings for one another.

Nothing in Adams’ debut feature reveals much promise, but the engaging Charlotte Ritchie has a lovely voice. After hearing the low-key, but sweet duet she sings with Craig Roberts at the end, you can only wonder why Adams had not included more music and much less of everything else.