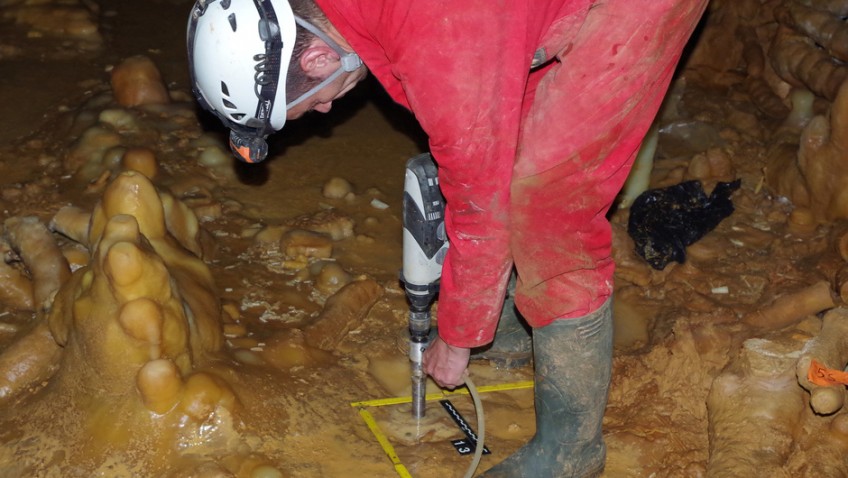 The caveman lifestyle of Fred Flintstone and Barney Rubble began in France – 138,000 years earlier than previously believed, according to new research.

Looking just like a scene from Bedrock, the famous fictional prehistoric city in sixties cartoon series The Flintstones, a set of man-made structures has been uncovered deep inside Bruniquel Cave.

They date back 176,500 years and are four and a half times older than the first formally proven cave use in Chauvet in the Arceche region of southern France 38,000 years ago.

This cave is in the Tarn et Garonne area of southwestern France and the ring of stalagmites 336 metres from the entrance are among the very first manmade structures in human history.

In addition, traces of fire show early Neanderthals, well before Homo sapiens, knew how to use fire to circulate in enclosed spaces far from daylight. The fires would have been used as simple light sources.

Bruniquel Cave was discovered in 1990 on a site overlooking the Aveyron Valley.

But most importantly, the cave contains original structures made up of about 400 stalagmites or sections of stalagmites, gathered and arranged in more or less circular formations. These circles show signs of fire use: calcite reddened or blackened by soot and fractured by heat, as well as burnt matter including bone remnants.

An inventory reveals a total of 112 metres of stalagmites broken into well-calibrated pieces, weighing an estimated 2.2 metric tons.

The components of the structures are aligned, juxtaposed and superimposed in two, three and even four layers with props around the outside, apparently to hold them in place, and filler pieces.

Marks left by the wrenching of stalagmites from the cave floor to make the structures have been identified nearby.

The Neanderthals made these structures by breaking stalagmites and rearranging the pieces.

Their very existence, virtually unique in the annals of archaeology, was already an astonishing discovery.

In prehistory, it wasn’t until the beginning of the recent Paleolithic in Europe, plus some isolated cases in Southeast Asia and Australia, that man was known to make regular incursions into the underground world, beyond the reach of sunlight.

But the Bruniquel stalagmite structures were built long before modern humans arrived in Europe around 40,000 years ago.

We now know, some 140 millennia before the arrival of modern man, Europe’s first Neanderthals were occupying deep caves, building complex structures and maintaining fires in them.

The researchers, whose findings were published in the journal Nature, also wonder what the function of these installations, so far from daylight, could have been.

Eliminating the unlikely hypothesis of shelter, given the structures’ distance from the entrance, was it to find materials of now-unknown utility? Could it have been for “technical” purposes, such as water storage? Or for the observance of religious or other rites?

In any case, the researchers confirm that the Neanderthals had to have an advanced social organization to build such constructions. Further studies will attempt to explain their function, which for the moment remains the biggest mystery surrounding Bruniquel Cave. Dr Jacques Jaubert, of the University of Bordeaux, said: “The regular geometry of the stalagmite circles, the arrangement of broken stalagmites and several traces of
fire demonstrate the anthropogenic origin of these constructions.

“Their presence at 336 metres from the entrance of the cave indicates that humans from this period had already mastered the underground environment, which can be considered a major step in human modernity.”